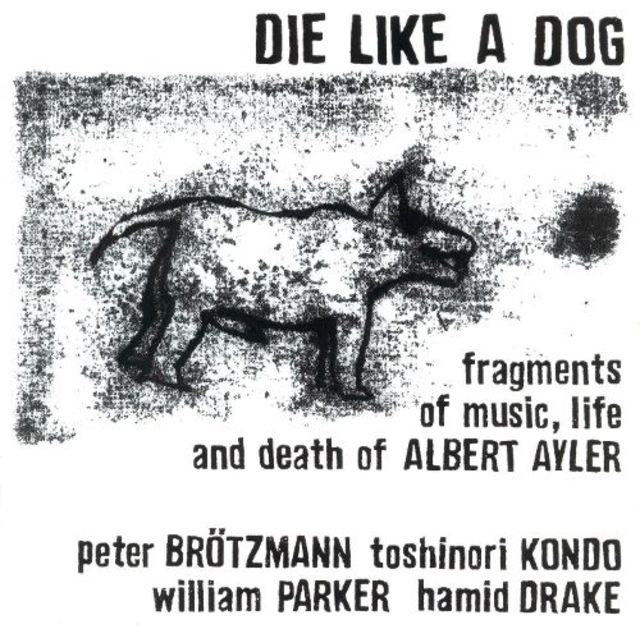 This first recording of the Die Like a Dog Quartet is fittingly subtitled Fragments of Music, Life and Death of Albert Ayler. In the liner notes (in both German and English), Peter Brötzmann writes of his passionate empathy for a musician whom he considers a kindred spirit; Brötzmann feels a link with Ayler since each were doing a similar thing "at the same point in time" although neither musician had heard the other. And so, lightly scattered throughout this first meeting of the Die Like a Dog Quartet are fragments of quotes from Ayler's Bells, "Ghosts," "Prophet," and more. In August 1993 Brötzmann was joined for a live concert in Berlin by legendary free jazz trumpeter Toshinori Kondo (who also occasionally utilizes electronics effects) and the wondrous rhythm section (although they are no straight time-keepers) of bassist William Parker and percussionist Hamid Drake. And so here, on one recording, you get four musicians who, whenever they're playing, play with every ounce of their attention, passion, and ability. Add to this each musician's great ability on his respective instrument and you get music that is alternately moving, invigorating, and astonishing. The dynamics range from rattles, long, low breaths, and short staccato blurts to the kind of exploding intensity and energy that is usually associated with Brötzmann. There are also two takes (one, just over a minute long) on the standard "Saint James Infirmary" that come at the beginning and end of the three-part "No. 2."
Review by Joslyn Layne
Top
Post Reply
1 post • Page 1 of 1