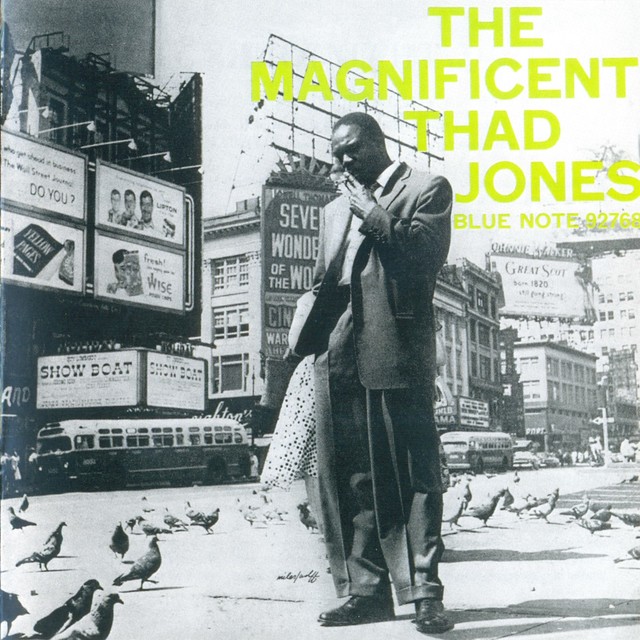 In 1956, trumpeter Thad Jones was making his way forward as a leader and apart from his important role with the Count Basie Orchestra, having recorded for the Charles Mingus owned "Debut" and Period labels. But this release for Blue Note most firmly established him as one of the premier musicians and composers in modern jazz; it's titled "Magnificent" for many great reasons. There are several precedents set here; the initial foray out of Detroit for the young pianist and fellow Michiganian Barry Harris, the identifying of a personalized small group, as well as individual sound of Jones, and his ability to easily bring great jazz icons together as a team. With Detroit's Billy Mitchell on tenor sax, Percy Heath's bass, and stellar drummer Max Roach, this quintet makes truly great jazz music together. Starting with Heath's spooky bass lines surrounding "April in Paris" melting into the silky smooth tenor of Mitchell, you immediately know you're in for a unique listening experience. Jones' singing soul on his horn comes through best on the ballads "If Someone Had Told Me," in tandem with the pristine piano of Harris during "I've Got a Crush on You," and in duet with Kenny Burrell on "Something to Remember You By." Not forgetting to follow in the footsteps of Dizzy Gillespie/Miles Davis/Clifford Brown examples before him, Jones bops strong and proud on "If I Love Again," spurred on by Roach constantly mutating the rhythm changes, and using counter-melodies while jousting with Mitchell on "Billie-Doo." The single, definitive, and most enduring piece is the near-11-minute "Thedia," a classic post-bop case study that everyone should know and revere. The musicianship being at such a lofty plateau, so intelligently selected and executed, this CD is a must-have for every collection, and is generally regarded as the very best work of Jones, later big-band recordings with Mel Lewis notwithstanding. [An RVG remastered version of the CD was released in 2007.]
Review by Michael G. Nastos
Top
Post Reply
1 post • Page 1 of 1