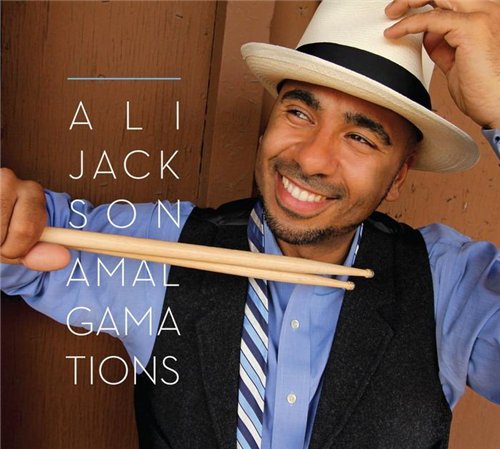 A jazz drummer, especially one with skill and taste, will inevitably be a part of many ensembles and musical situations. A career shaped by these partnerships and collaborations, with their intimate challenges and discoveries, can create friendships that last long and inspire indefinitely.

The great New York born, Detroit raised, drummer Ali Jackson has carved a place for himself alongside the greatest musicians of his generation by being a fantastic instrumentalist and tremendous ensemble member. On his new recording, Amalgamations, Jackson looks to his influences, both musical and personal, to create a program of wide-ranging and exploratory pieces featuring a tremendous cast of his talented friends.

From his earliest days in Detroit, Jackson has been involved in jazz music, first with his bassist father and first teacher, Ali Jackson, Sr., with whom he began playing professionally at the age of eleven. After the passing of Jackson, Sr., trumpeter and jazz firebrand Wynton Marsalis became an important part of the youngster’s life as a mentor, friend and, later, employer, with whom Jackson has performed as a member of Marsalis’s small ensembles and the Jazz at Lincoln Center Orchestra.

Marsalis is present here along with the constellation of extraordinary talent that Jackson has surrounded himself with from his earliest days behind the kit. Among the other highlighted artists are trombonist Vincent Gardner, saxophonists JD Allen and Ted Nash, pianists Aaron Goldberg, Eldar Djangirov and Jonathan Batiste, and bassists Omer Avital and Carlos Henriquez.

Amalgamations presents a variety of musical settings in which Jackson leads ensembles ranging in size from a duo to a quintet. The leader’s design is to provide a “musical canvas” on which his brilliant collaborators can showcase their talents. The compositions were either written or selected to allow the musicians the best setting to really let loose and express themselves.

The trio of Marsalis, Henriquez and Jackson takes the harmonic structure of “Cherokee” and spins it on its head, while the bluesy swagger of the gospel tune “Just a Closer Walk with Thee” is perfect for the organ and funky drum work. The expert piano of Eldar Djangirov introduces Jenkins and Mercer’s “I Love You,” which also features the expressive tenor sax of JD Allen and the exquisite brushwork of the leader. The exciting version of Monk’s namesake tune “Thelonious” is a swinging workout for Batiste, Gardner and Jackson, which is followed by a version of Jackson’s “Kentucky Girl” played in an expressive duo with Avital.

JD Allen’s lush tenor is wonderfully present on a trio rendition of Wayne Shorter’s “Fee Fi Fo Fum.” The recording rounds off with another piece by a legendary tenor player: Joe Henderson’s “Inner Urge” is performed with a fantastic yet controlled intensity with Ted Nash holding down on alto sax and Henriquez showing his masterful chops on bass.

Together with a company of the world’s best jazz musicians, Ali Jackson has created an extraordinarily varied and fantastically assembled work of art on his new recording Amalgamations.
Top
Post Reply
1 post • Page 1 of 1