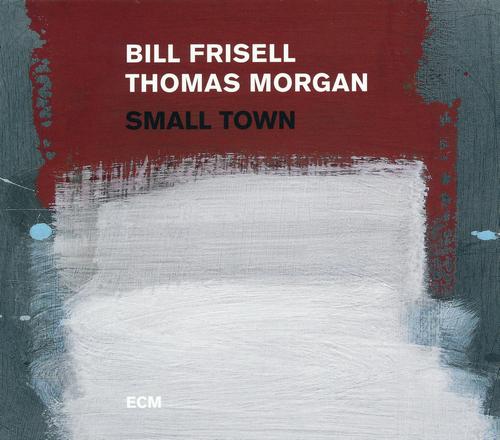 Before Small Town, guitarist Bill Frisell hadn't led an ECM date since 1988's Lookout for Hope. He started hinting at a return to the label in the early 2010s. He was part of Stefano Bollani's trio on the lovely Joy in Spite of Everything in 2014, and in Andrew Cyrille's quartet on 2016's The Declaration of Musical Independence. Frisell formed a duo with longtime bassist and sometime-collaborator Thomas Morgan for the live date Small Town, recorded at the Village Vanguard. (They last worked together on record for Paul Motian's The Windmills of Your Mind in 2011.)

This program is eclectic; both players reach for intimacy at every turn, though given the setting, they couldn't avoid it even if they wanted to.

The set opener is Motian's "It Should Have Happened a Long Time Ago." The tune was first issued on a 1984 trio album of the same name featuring Frisell and saxophonist Joe Lovano. This duo version contains all the nuance and grace of the original, though the late drummer's whispering elegance is missed. A wonderful contrast is created by the sprightly, swinging read of Lee Konitz's "Subconscious Lee" that follows. (Konitz was in the audience and this was pulled out spontaneously as a tribute.) Morgan's "walk" is just as active and harmonically rich as Frisell's deep, melodic post-bop playing. The guitarist's predilection for Americana (dating back to 1997's Nashville) is showcased in the middle of the program with a faithful reading of the Carter Family standard "Wildwood Flower" and on the title track, which weaves together a tender folk melody with blues accents. Fats Domino's "What a Party" is introduced by Morgan's punchy bassline. A rootsy R&B tune by nature, this pair pull elements of New Orleans jazz and Bo Diddley-esque rock & roll from its harmonics. "Song for Andrew No. 1" is a long ballad that appeared on Cyrille's album as "Andrew Cyrille." The manner of interplay here is spacious and tempered yet deceptive in its intricacy. After the overly long original "Poet-Pearl," the set closes with a fantastic read of "Goldfinger," with Morgan's bass plumbing the depths of the tune's harmony, prompting Frisell to explore the blues (slightly) hidden under its changes. Morgan is a deeply intuitive player with a glorious earthy, woody tone. He anchors Frisell's more speculative tendencies, allowing the unexpected (and perhaps previously undiscovered) room to emerge and hold its ground between them with the seams showing. Small Town is an excellent showcase for this duo; here's hoping it's only a first volley.
Review by Thom Jurek
Top
Post Reply
1 post • Page 1 of 1