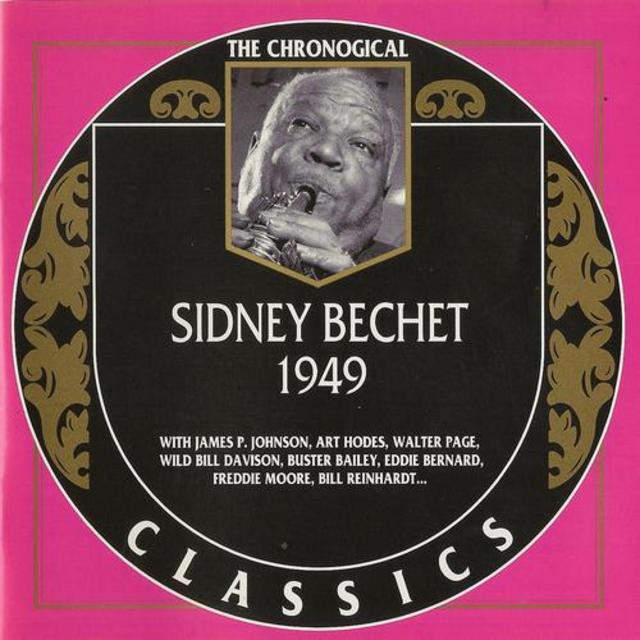 For some reason, many jazz historians seem to consider Sidney Bechet's collaborations with Wild Bill Davison as somehow flawed. Apparently, they expect the feisty, cornet-toting rascal to lie down and allow Sidney to walk all over him. If Bill were so compliant and non-assertive, he never would have earned his moniker. Sure, the two horns jostle each other during hot numbers, but that's what's supposed to happen. This is, after all, based in the traditions of competitive/cooperative New Orleans polyphony. Maybe a baritone sax would have added some ballast to the overall mix, but it didn't happen that way. Instead, on the session of January 21, 1949, we get bassist Walter Page, who was no slouch, and the magnificent piano of Art Hodes. "Tin Roof Blues" and "Down and Out" are both studies in eloquence, and "I've Found A New Baby" roars like a steam locomotive heading round the southern rim of Lake Michigan for Chicago. Hodes begins "Saints" with a lovely passage from "Nobody Knows the Trouble I've Seen" before drummer Freddie Moore kicks it into high gear. The big treat in this package is a relatively rare blowing session that yielded four tasty selections issued on the Circle Record label. The front line of Bechet, trumpeter Albert Snaer, trombonist Wilbur DeParis and clarinetist Buster Bailey execute thrilling runs with collective precision. The rhythm section of James P. Johnson, Walter Page and George Wettling is richly supportive. Bechet's beautiful "Song of the Medina" is pure wonderment, carrying a fragrance similar to that of his famous "Petite Fleur." Three titles for the Jazz Ltd. label illustrate the expanse of Papa Bechet's stylistic wealth: "Maryland" is traditional New Orleans parade music at its very finest. "Careless Love" is the choicest of blues, and "Egyptian Fantasy" resembles Duke Ellington's "Black and Tan." For their second 1949 Blue Note get-together, Bechet and Wild Bill are back with Hodes and Page, now accompanied by ex-Fats Waller percussionist Wilmore "Slick" Jones. Trombonist Ray Diehl blows solid, sensible lines, his every hoot funkily cohesive as the two lead horns carve a large swath through the middle of half-a-dozen staples of the Dixieland repertoire. Their nice update on "Cake Walking Babies From Home" is more than invigorating, and "Jericho" gets hammered out with rowdy insistence. By May of '49, Bechet had invaded Paris and was leading a team of eager, ambitious Frenchmen in creating a torrent of old-fashioned jazz records. It was the beginning of his career as le Grand Bechet, revered émigré, living with dignity in a city where they eventually had the good sense to name a street after him.
Review by arwulf arwulf
Top
Post Reply
1 post • Page 1 of 1