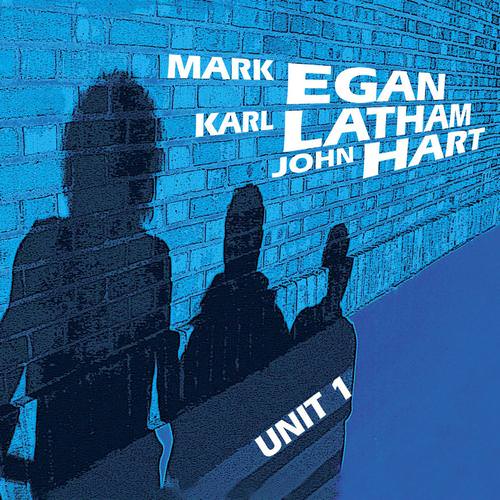 So far the best fusion album released this year, "Unit 1" was actually recorded live at the small Bula club (in Newton, New Jersey) from March to May 2008. Mark Egan & Co. taped three gigs and selected their favorite moments. The result is impressive, a fiery collection of jazz classics - from Thelonious Monk to Wayne Shorter to Weldon Irvine - performed by a power trio that combines creativity, energy, swing and great grooves; something very different from similar groups that seem able only to play loud and say nothing.

Mark Egan belongs to a brilliant generation of bassists, which included such masters as Will Lee, Alphonso Johnson, Anthony Jackson, and of course the late Gary King and Jaco Pastorius. I've been a huge fan of Egan since I bought a copy of David Matthews' "Dune" LP back in 1977, still in my native Brazil. Three years later I saw him playing live for the first time, as a member of the Pat Metheny Group, when they took the "American Garage" Tour to the Rio/Monterey Jazz Festival in August 1980.

Later on, I attended many of his gigs with the Gil Evans Orchestra @ Sweet Basil in NYC, and also had the chance to talk more with him when Creed Taylor invited me, in October 1990, to the rehearsals that the CTI Superband project was doing for the "Chroma" tour in Japan. When I returned to New York in April 1991, Mark was playing every Monday night @ Zanzibar, with an all-star combo led by my late dear friend Joe Beck. For two months, I went there each and every Monday night. More recently, we met in the CTI All Stars concerts in 2009 and 2010.

I've met John Hart only once, in 1987, during some recording sessions with Yana Purim at Deodato's Duplex Sound Studio in NYC that, unfortunately, were never released. Karl Latham is the only one I never caught live, but now I know that I need to do it urgently. Listening to him on "Unit 1" gave me the same goosebumps I felt when I first heard Chris Dave with Bob Hurst a couple of years ago, and Steve Gadd with Joe Farrell four decades ago.

The program on "Unit 1" ranges from Monk's bebop hymns "Epistrophy" and "Bemsha Swing" to Weldon Irvine's funky opus "Mr. Clean," originally written for Freddie Hubbard's 1971 album "Straight Life" and rediscovered during the acid-jazz heyday in the late Eighties, when it became a dancefloor classic in Europe. Curiously, it's also the opening track of the CTI All Stars' "Live at Montreux 2009" CD/DVD, featuring Egan on bass.

Ann Ronnell's "Willow Weep For Me," Miles Davis' "All Blues," Wayne Shorter's "Footprints," and Sonny Rollins' famous calypso "St. Thomas" receive very fresh and astonishing treatments, sandwiched by the opener "Old Folks" and the closing ballad "My One and Only Love," all brilliantly recreated. But maybe the most surprising track is "Footprints," played as a fast & furious "baião" (a rhythm from Northeast Brazil), with Egan using the bass line of Hermeto Pascoal's tune "Jive Talk," often performed by Airto & Flora Purim in the 70s, and recorded on Flora's "500 Miles Hight At Montreux."

The trio interaction is astounding, and that's how all fusion bands should always sound, playing with feeling and emotion, far away from any boring acrobatics. It's almost impossible to highlight the best solos, but Mark Egan's bass flies & slides in a stunning way during his improvisation on "St. Thomas." The fluid lines of John Hart's guitar -- the man is at the pinnacle of his inventiveness, giving lessons of adventurous phrasing and dynamics, always employing the perfect level of distortion -- talk & cry on all tracks, reaching a special degree of confidence & intensity on "Mr. Clean" and "Bemsha Swing." And Latham's drums (what a musical giant!) are particularly hallucinating on "Epistrophy," "Bemsha Swing," "Footprints" and the reggae-ish take on "Willow Week For Me."

Curiously, Mark Egan decided to eliminate the applauses when doing the mix. So, except for some light noise from the audience, the CD seems to be a studio recording instead of a live one. I only regret that some tracks end in fade-out. But nothing diminishes the excellence of the album, full of joy & excitement.
Review by Arnaldo DeSouteiro
Top
Post Reply
1 post • Page 1 of 1