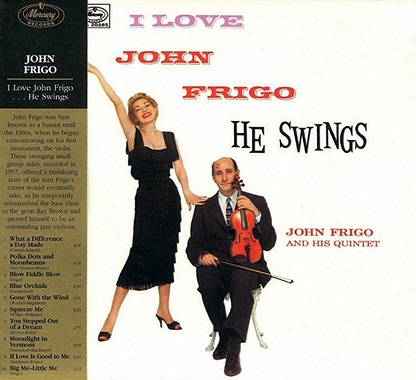 Johnny Frigo spent most of his professional life as a jazz bassist, but in the mid-'80s he picked up his first instrument, the violin, and started what amounted to a second jazz career on that instrument. Frigo biographies frequently refer to an obscure album release from the 1950s that prefigured this change, and this is it, a session Frigo recorded in 1957 at Universal Recording Studios in Chicago for Mercury Records. Joined by guitarist Herb Ellis (Frigo and Ellis had previously worked together in the Soft Winds Trio with pianist Lou Carter), Norm Jeffries on drums, Dick Marx on piano, Cy Touff on trumpet, and the great Ray Brown on bass, Frigo delivers a wonderful swing/bop mixture that stands seamlessly with his 1980s releases. At times he uses the violin like a horn, punching in and blocking out solid runs, and at other times, like on the beautiful "Blue Orchids," he uses the instrument to approximate a tenor vocalist, stretching the melody into marvelous shapes. Frigo even does a call-and-response duet with himself on the self-penned "Big Me -- Little Me," answering the violin lines with his own bass runs. I Love John Frigo...He Swings somehow got lost in the shuffle when it was released, and Frigo went back to bass playing for 30 years before getting a late second chance at recording this kind of small-group sides on violin once more. The original master tapes of this session apparently suffered some degradation, and the recordings red-line occasionally in the digital transfer, but it's nothing too serious. Mercury/Verve should be commended for bringing this delightful album back to life.
Review by Steve Leggett
Top
Post Reply
1 post • Page 1 of 1