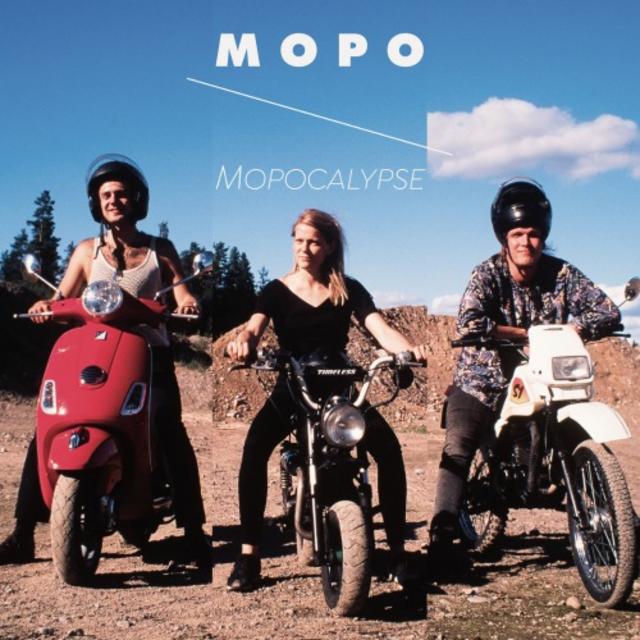 Mopo, the Finnish trio from Helsinki, have now been on the scene since 2009, and since 2011 winning their selection round for the Young Nordic Comets competition, have been performing their brand of quirky and frequently funky jazz around Europe. Their fourth full length album continues their punk inspired attitude to music making with eight tracks of largely energetic hard jazz.

The first tracks "Tökkö" and "My Best Friend" feature Eero Tikkanen playing an elderly electric bass, creating a raunchy mix contrasting the other unadulterated acoustic sounds where a repeated bass line is worked to the limit, coming close to compulsive. With the addition of a guesting Farfisa organ on "Noita" (Witch), this insistent repetition, combined with prime writer, saxophonist Linda Fredriksson's funky solo becomes positively disturbing, but ends with a few bars of light relief!

Compared with their last recording, Beibe, this album is more forthright, less experimental. Not that they don't do lyrical, as in the fourth track "Mustafa," with Nieminen's rolling drums behind Fredriksson's sparse precise alto and Tikkanen's steady but pleasingly wandering bass lines. "Sinut muistan ainijan" (You, I'll remember always) is likewise a wistful ode with delicate soloing from the two melody instruments.

The band is as tight and jokey as ever, and their idiosyncratic attitude to music making is featured in the album sleeve, which includes a minute by minute account of their 24-hour marathon around Helsinki in 2017, playing venues from the steps of the Parliament building to some very unhip karaoke bars. Fredriksson points out here that fatigue-induced indolence and physical exhaustion caused her to reduce the number of notes played. Maybe this has introduced a slightly more spartan sound to the band, and Mopo's direction is more straight forward. But when it comes to the album title, you must choose yourself whether to believe its definition in the Urbandictionary: "A slew of funny and/or poor taste motivational posters (mopo) relating to a significant series of related, and often disasterous, events."
by Anthony Shaw
Top
Post Reply
1 post • Page 1 of 1