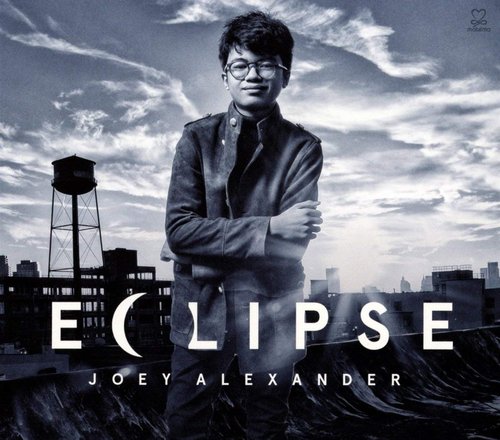 Pianist Joey Alexander knows how and when to strike the ivories. At the age of 14 he has already recorded two GRAMMY-nominated studio albums, My Favorite Things (Motema Music, 2015) and Countdown (Motema Music, 2016). Late in 2017, Alexander released Joey.Monk.Live! (Motema Music), a critically acclaimed surprise release to honor Thelonious Monk's centennial. Alexander has released his third studio album entitled, Eclipse. The eleven selections are mixture of originals and standards, demonstrating his aptitude as a composer (Alexander composed six of the eleven tunes), arranger, bandleader, and player. Joining Alexander is a rhythm section of bassist Reuben Rogers and drummer Eric Harland, and guest appearances by saxophonist Joshua Redman on three tracks.

Alexander's original "Bali" opens the disc in a celebratory mood, with a relaxed melody that has nice interaction between the bass and melodic figures. The Latin-ish straight eight feel is a perfect setting for Alexander's playful solo approach, and after Rogers mellow solo, Alexander begins the dance. His lines are clear and defined by clean phrasing and rhythm. He takes his time to build in intensity, developing each melodic fragment to a logical completion before moving on to the next idea. The trio has a very relaxed feel and joy about their playing and they are obviously are having fun playing together.

"The Very Thought of You" has guest artist Redman on the track. Alexander starts the tune of with a solo piano version of the melody. With intricate inner voice leading and smooth rhythmic styling, Alexander takes some very interesting harmonic turns, that are sure to delight. Redman enters and restates the melody; the duo is in symbiosis with each other and blend beautifully. Redman's solo is beautiful, his upper register work is impeccable. The two interact in a way that is conversational highlighting what a good listener Alexander is.

Eclipse is a wonderful third outing by Alexander. There is a nice range of tempos and feels, reflective moments and dramatic displays of virtuosity, and even moments of free group improvisation. Alexander is a confident and creative player that has a trio that converses with trust and respect. Adding the amazing sound of Redman, and you have a magical, musical journey. It's all about exploring the many possibilities of emotion that is Eclipse.
Review by Geannine Reid
Top
Post Reply
1 post • Page 1 of 1