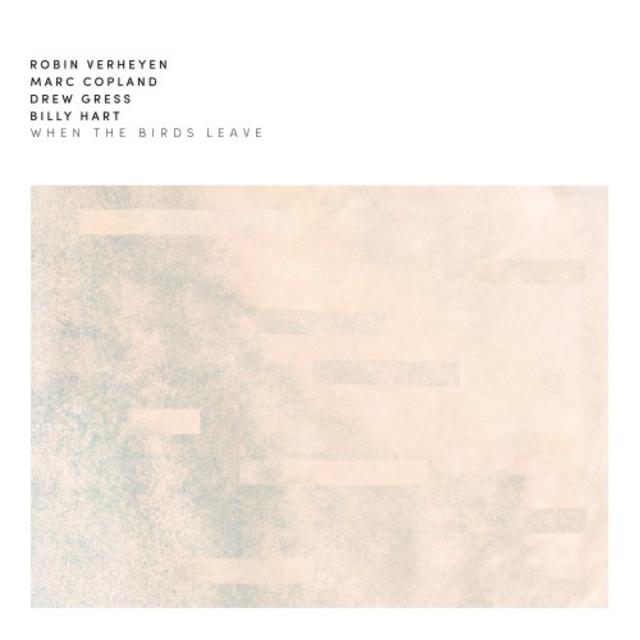 Verheyen is capable of great expressiveness with his saxophone. The album begins with his composition "Rest Mode," a track that implies a shade of mystery. The sax solo poses questions that are reinforced by Copland's choice of chords. There is a yearning effect. Verheyen squeezes the reed producing squeals and wah-wahs. Copeland offers up a bluesy solo and Hart mines the trap set for color.

Gress and Hart initiate another Verheyen piece, "Jabali's Way." The music speeds along under Gress's strong attacks and Verheyen's rolling solo. The tune showcases the saxophonist's ability to express musical ideas in the lower register of the alto. Hart adds derring-do drumming in the background. After a bluesy rolling sequence, Copland sends a flurry of notes up and down the piano. Hart follows with controlled fury in active arcs across the drums. The tune ends with a Verheyen squall.

The Verheyen ballad "When the Birds Leave" is tinged with melancholy, as plaintive bird cries emanate from Verheyen's sax. There's some dream like rumblings on the piano. Hart's cymbal work is quite effective—you hear surf splashes -and the bass emerges at the end with a touching finish. The album includes two more ballads, Verheyen's "Stykkisholmur" and Gress's "Vesper." Both are blues oriented and provide beautiful soulful melodies. One might recall a cool early morning walk along a river bank, steam rising from nearby manholes, and the sky a subtle blue and orange. "Vesper" ends with a robust solo from Gress.

Verheyen's "Melody for Paul #1" has a mysterious abstract lyrical quality and the piece provides Hart with the room to exhibit a variety of drum attacks, cymbal sprays, and rolls.

The album features two collective improvisations. In the first, "Operator," the group delivers a funky reading, with Veryehen contributing a syncopated off-beat sax line and Copland choosing a chord structure and some back and forth between left and right-hand that projects a slightly sinister quality. The second, "Traveling Dreams," begins with a stunning sax solo. Then Verheyen enters into a challenging conversation with the drums, piano, and bass.

Verheyen's expressive saxophone is enough to recommend this album. But when you throw in great compositions and masterful strokes from the supporting trio, this album rises to required listening. Enjoy.
by Don Phipps
Top
Post Reply
1 post • Page 1 of 1