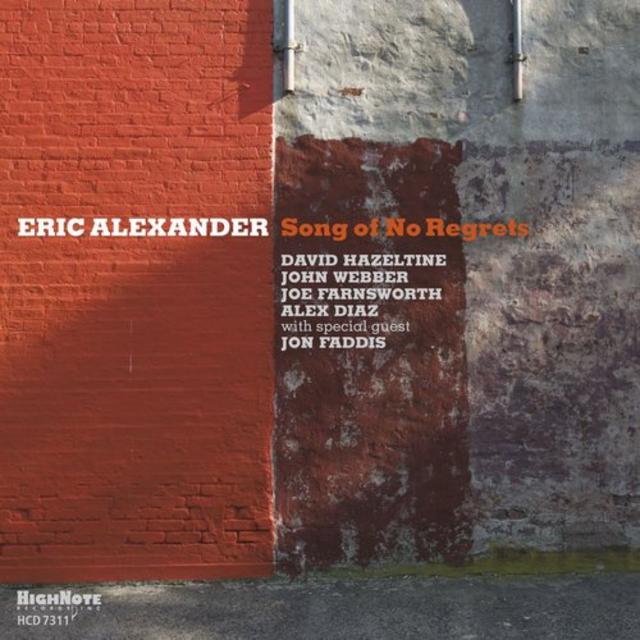 Saxophonist Eric Alexander's improvisational skills have only grown deeper since he burst onto the scene in the early '90s. Blessed with a rounded tone and impressive technical chops, Alexander has long carried on the swinging, acoustic jazz tradition with a sound informed by such icons as Dexter Gordon, John Coltrane, and Sonny Rollins. Less remarked upon is just how inventive and surprising his version of straight-ahead acoustic jazz can be. With his superb 2017 effort, the Latin-infused Song of No Regrets, he reveals this inventive side, offering up a set of groove-based anthems, inspired in part by the buoyant '60s pop of Sergio Mendes. Joining him here are a cadre of longtime associates in pianist David Hazeltine, bassist John Webber, and drummer Joe Farnsworth. Also augmenting these largely Latin-tinged arrangements are percussionist Alex Diaz and trumpet titan Jon Faddis. What's particularly compelling about Alexander's approach here is how he marries the bubbly Brazilian pop of Mendes' Brasil '66 band with his own kinetic, post-bop style. It's a balance he strikes throughout Song of No Regrets, applying his searching, muscular jazz flow to not only the Mendes-penned title track ballad, but also to the fiery opener "But Here's the Thing" and his intense take on Jorge Ben's bossa nova classic "Mas Que Nada" (also made famous by Mendes). Alexander also works a similarly ingenious magic on Stevie Wonder's "These Three Words," reworking the midtempo '90s R&B groover into a soulful, afterglow-ready instrumental featuring Faddis on Harmon-muted lead. Elsewhere, he dives into the boogaloo-heavy "Boom Zoom," and dims the lights to a sultry, dreamy haze on the languid ballad "Corazon Perdido."
Review by Matt Collar
Top
Post Reply
1 post • Page 1 of 1