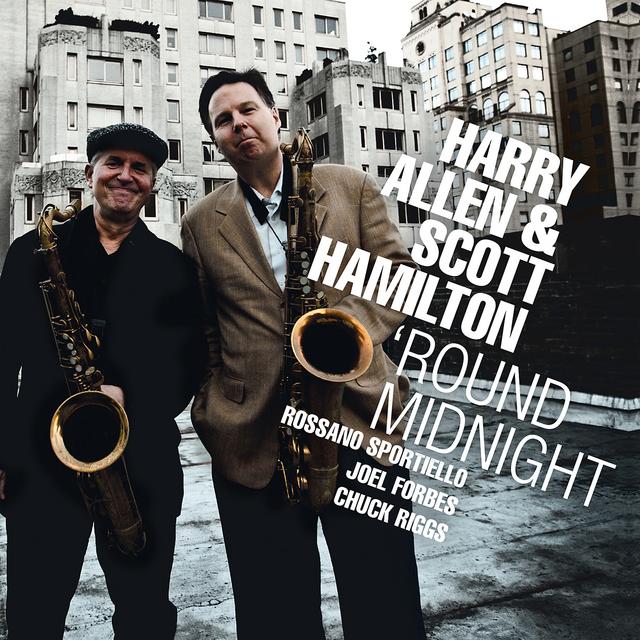 Having Harry Allen and Scott Hamilton team together on a record date, at a jazz party, at a jazz festival or on any bandstand is quite logical. Their playing is very complementary and they blend together well yet they have slightly different sounds. They help keep the tradition of swing tenor alive without sounding exactly like any of their historical predecessors. And they can always be relied upon to play music that is both exciting and tasteful.

Scott Hamilton and Harry Allen first recorded together on the obscure Just You Just Me (put out by Japanese BMG) and in 2004 they joined forces for Heavy Juice (Concord). For their third joint recording, the two great tenors are joined by Harry’s regular rhythm section. “I love playing with them,” says Harry. “Wherever I go, no matter how famous the rhythm section is that I play with, I never feel that they are quite as good as my musicians. I have been playing with pianist Romano Sportiello for three years; he is one of the best. He always has such a great hookup with Chuck Riggs, a really swinging drummer, and bassist Joel Forbes who has such a great beat. They swing hard from the first moment.”

When listening to Harry Allen and Scott Hamilton jamming together, it is easy to think of the great tenor quintets of the past, particularly those of Al Cohn & Zoot Sims, Eddie “Lockjaw” Davis & Johnny Griffin, and Gene Ammons & Sonny Stitt. While the latter two teams were always very competitive, this Allen-Hamilton recording is perhaps most reminiscent of Al & Zoot in that the two tenors are very supportive of each other, they often seem to think as one, and they inspire each other to play at their best without being compelled to try to “cut” each other.
Top
Post Reply
1 post • Page 1 of 1