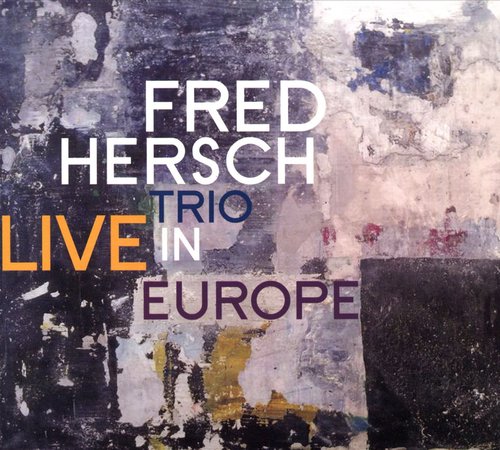 Fred Hersch's 2009 recording, Whirl (Palmetto Records), was where pure magic first occurred in the pianist's extensive and consistently superb discography. That particular outing introduced his now long-standing trio with bassist John Hebert and drummer Eric McPherson. Alive At the Vanguard (2012), Floating (2014), and Sunday Night At The Vanguard (2016) by the group followed, all on Palmetto Records.

For those who lauded Hersch's solo outing, Open Book (Palmetto Records, 2017) as his finest, most incisive and finely-focused outing, the pianist offers up Live In Europe, featuring his Hebert/McPherson team, to garner votes for that "Hersch's Best" slot.

Performed at Flagey Studio 4, in Brussels's former National Institute for Radio Broadcasting, Hersch was initially unaware that the set—which he regarded as one of his best trio performances ever—had been recorded. Upon finding out that it had been—and upon hearing the tape and having his belief in its extraordinary quality confirmed—he decided to release the music.

Spinning through Hersch's previous outings with this nine years and running trio says that they bring the "A" game every time. On Live In Europe it's an "A+" game. The players are as flexibly synchronized and adept at presenting their three-way improvisational and emotional expressionism as they could be, on a set that begins with a jittery take on Thelonious Monk's "We See." The group follows with six Hersch originals, including tributes to British pianist John Taylor and a calypso-esque nod to saxophone legend Sonny Rollins, before slipping into the Herbie Hancock songbook with the achingly beautiful "Miyako," that gives way to an effervescent take on a second Shorter tune, "Black Nile." It's a set where Hersch sounds freer, more open to possibilities, employing the same exploratory approach he presented on the epic "Though The Forest" on his Open Book outing.

And the sound must be addressed. It doesn't get any better—a big plus, especially on piano trio outings. The piano is crisp, like a winter sunrise. Every nuance of McPherson's intricate and energetic drumming has crystal clarity, and Hebert's empathic and emphatic bass lines come through with a clean-cut lucidity.

The show wraps it up with a solo encore of "Blue Monk," a sober and contemplative return to Monk-land, a place to which Hersch often travels.
Review by Dan McClenaghan
Top
Post Reply
1 post • Page 1 of 1