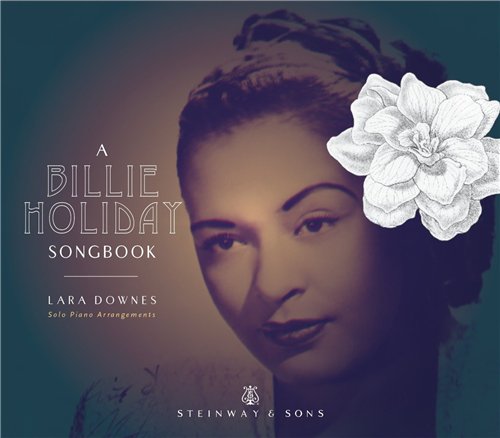 Practically everybody knows who Billie Holiday was. Perhaps not as many people know Lara Downes. So, a little about both of them.

Billie Holiday (1915-1959) was an American jazz singer and songwriter, dubbed "Lady Day" by her friend and musical partner Lester Young. Ms. Holiday had a strong influence on jazz (and pop), her singing style, largely inspired by jazz players, beginning an innovative way of handling tempo changes and phrasing. During her heyday in the 1930's, 1940's, and 50's she toured and recorded with Teddy Wilson, Count Basie, Artie Shaw, and Paul Whiteman, among others, culminating in both legal troubles and sold-out concerts at Carnegie Hall. She was, and remains, an American icon.

Lara Downes is a Steinway artist whose work exhibits an exceptionally lyric and dramatic presence. Born in San Francisco of Caribbean and Russian heritage, Ms. Downes began piano lessons at age four and later "spent a decade studying and performing with her sisters in Europe, in what she calls 'a gypsy-like existence' that took the family from Paris to Venice, Vienna, Basel and Rome."

Since making concert debuts at the Queen Elizabeth Hall, London, the Vienna Konzerthaus, and the Salle Gaveau, Paris, Ms. Downes "has won over audiences on the world's stages, including Carnegie Hall, Kennedy Center, and Lincoln Center." What's more, her recordings have won her new fans all over the world, with excellent critical and public acclaim. My own reactions to her previous albums Some Other Time (with cellist Zuill Bailey), 13 Ways of Looking at the Goldberg, and Exiles' Cafe have been uniformly favorable, Ms. Downes impressing me with her imagination, playfulness, and straightforward, unadorned virtuosity.

On A Billie Holiday Songbook, Ms Downes plays twenty-two songs made famous by Billie Holiday, most of them arranged for piano by Jed Distler. As always, Ms. Downes plays each piece lovingly, caressingly, soulfully. I suppose one could say that it is something of overkill to have a classical concert pianist play popular tunes, but when you hear the results, you have to concede that no one could do them any better. And for most of us music is music; we just want it rendered as well as possible, and that's what Ms. Downes does.

Favorites? Yep. "God Bless the Child" displays Ms. Downes's ability to convey a high emotional content along with an abundance of showmanship. "Blue Moon" is a perennial favorite, and in its original piano arrangement it projects a wonderfully upbeat yet bluesy quality nurtured by Ms. Downes's playing. "Body and Soul" is predictably fine, with the piano performance reflecting Ms. Holiday's vocal style remarkably well. We practically hear Holiday behind the piano.

"Billie's Blues" bubbles over with the kind of jazz mannerisms we've come to expect from Ms. Holiday herself. "Ain't Nobody's Business" is simply a favorite song of mine, so I was delighted to hear Ms. Downes do it such credit in a smoky nightclub style. "I'll Be Seeing You" is a song I personally associate more with Jimmy Durante than Billie Holiday, but in any case Ms. Downes gives it a sweet, lovely new life, as she does with all of these songs. It's a lovely album.

Producer Dan Merceruio and engineer Daniel Shores recorded the piano at Sono Luminus Studios, Boyce, Virginia in June 2014. As usual, we can depend on good sound from Sono Luminus. The piano looms a bit larger and closer than I anticipated, but it's comfortably warm and natural, with a mild room resonance making it appear rich and powerful. Although I would have preferred a tad more distance and a little more definition, there is no denying the instrument's presence and impact. (John J. Puccio, Classical Candor)
Top
Post Reply
1 post • Page 1 of 1