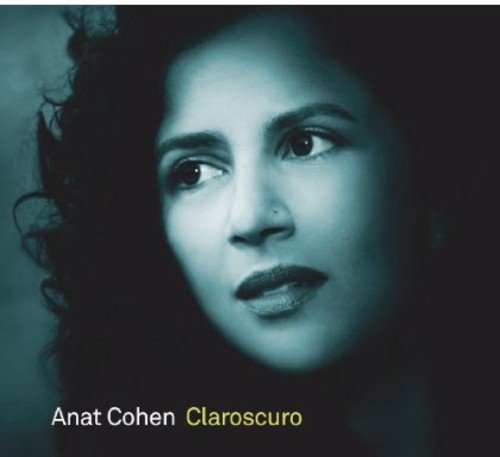 Art begets art on Anat Cohen's Claroscuro. The Israeli-born, New York-based multi-reedist leaves the confines of Benny Goodman's world behind, following her clarinet-only sojourn into king of swing territory, Clarinetwork: Live At The Village Vanguard (Anzic, 2010), with a wide-ranging musical treatise on the balance between light and dark. Cohen addresses each end of the color spectrum on its own terms during this eleven-song program but, more often than not, plays one off the other within a single performance. She's savvy enough to know that dark doesn't exist without light and that the contrast and marriage between the two is what makes them stand apart.

Jason Lindner's "Anat's Dance" opens the program and focuses on Cohen's sunny clarinet work, Lindner's moody piano and the shifting rhythmic terra firma that morphs beneath them. Cohen's bass clarinet connects with Paquito D'Rivera's clarinet as they move over a primal percussion foundation on her "Kick Off, while pan-global rhythmic purpose and open exploration collide on drummer Daniel Freedman's "All Brothers." These prove to be the only originals on this album, but originality resides in every second of music.

Cohen delivers her most soulful tenor performance to date on "The Wedding," produces some poignant soprano work at the start of "Tudo Que Voce Podia Ser," and walks a line between seductive and mournful on "As Rosas Nao Falam." She shares a deep and abiding love for choro music with D'Rivera ("Um A Zero"), engages in a Louis Armstrong-based love affair with trombonist/vocalist Wycliffe Gordon ("La Vie En Rose") and calls on her famous Cuban clarinet companion again for a trip through clarinetist Artie Shaw's psychosis-slathered theme song ("Nightmare"). Both men join Cohen on one track, Dr. Lonnie Smith's "And The World Weeps," and the results are electric; the song goes from mannered dirge to bluesy epic in Duke Ellingtonian fashion.

Cohen's omnivorous musical persona is well-documented on Notes From The Village (Anzic, 2008), where she jumped from saxophonist John Coltrane and singer Sam Cooke to pianist Fats Waller with ease, and Noir (Anzic, 2007), where she hit a homerun merging "Samba de Orfeu" and "Struttin' With Some Barbeque," but she works the musical diversity concept in a different way on this one. Notes From The Village was pleasing in a hard-to-pin-down way and Noir was fueled by passion, but Claroscuro succeeds on poise and shapeliness. The unrestrained enthusiasm that Cohen beautifully exhibits in other places is replaced here by a more deliberate and controlled balance of highs and lows, ups and downs....and light and dark. Claroscuro is a colorful date that confirms what's already been said about Anat Cohen on numerous occasions: she's one of a kind.
Review by Dan Bilawsky
Top
Post Reply
1 post • Page 1 of 1