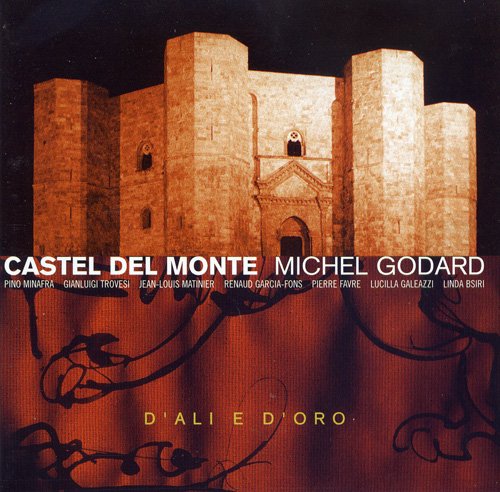 The Castel del Monte near Ruvo di Puglia, Southern Italy, was the last and most beautiful building of Frederick II (1194-1250), Roman emperor and King of Sicily. It dominates the Apulian landscape like a white crystal, a fata morgana beyond time and space whose original purpose will probably be a mystery forever. When German producer Achim Hebgen and French musician Michel Godard visited the castle together, they felt there should be music created in and for the building - music that is simultaneously in the past, the present and the future. Cooperating with some of the finest musicians from Italy, France and Switzerland (most of them known from the project La Banda), they imagined a timeless musical synthesis based on old forms (e.g. chaconne, folia, tarantella), yet open to the inspiring eternal atmosphere of the mysterious Castel del Monte.

Says Godard: "As envisioned the acoustics were superb. We recorded mostly in the inner court yard under the open sky. Some of the smaller ensembles were recorded in the rooms on the ground floor. The architecture of the castle is built on the octagon - so we needed eight musicians." Along the borders between Mediterranean folk song and modern composition, mediaeval tradition and jazz improvisation, the Castel del Monte project, initiated and produced by Achim Hebgen (SWR), became a great musical document of the European-Arabic heritage and its historical continuity. When you listen to this outstanding recording you get the feeling that artistic manifestos like this are just what Castel del Monte was erected for - 750 years ago.
Top
Post Reply
1 post • Page 1 of 1