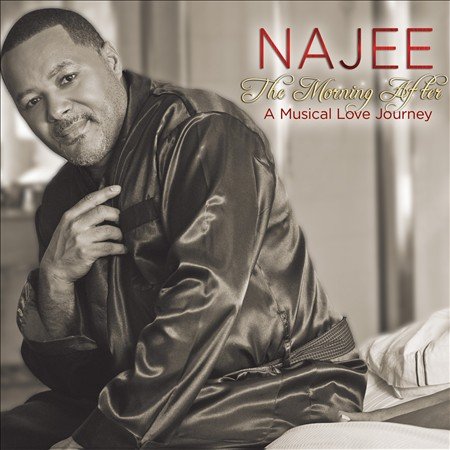 As one of the few smooth jazz practitioners who unashamedly brought an R&B attitude to his music while also throwing down some occasional be-bop, Najee honored his inspirations by such mentors as Dr. Billy Taylor in his genre blurring approach to music. Through he’s received skepticism at times from critics and other jazz purists, proof of his quality musicianship and the key to his longevity can partially be found on such recent classics as Najee Plays Songs in the Key of Life (a solid jazz tribute produced by George Duke paying homage to another hero, Stevie Wonder) and Najee’s 2012 release for his new label home, Shanachie Records, on The Smooth Side of Soul. Now on his sophomore turn for Shanachie, The Morning After: A Musical Love Journey, Najee shifts in a slightly different direction, one focused on storytelling and illustrating the high points of his memorable career and carrying listeners along his international journey.

Utilizing his vision as a romantic and world class jazz player, Najee’s conceptualization of The Morning After is a fantasy soundtrack come alive with inviting jazz/R&B grooves, world music treats and his saxophone dexterity. The opening twenty-two second skit, “Anticipation,” finds Najee waiting patiently on his special woman companion. Here starts the “Rendezvous,” running on an in the pocket groove with a few bass guitar pops, acoustic piano trimmings and Najee’s relaxed, soulful tenor sax. Giving props to the French Riviera, “San Tropez” is a soft Latin-rhythmic affair, shifting midway into a gospel-like breakdown where Najee lets his tenor sax fly at will. Simmering African/reggae beats lay the foundation for “Mafalala,” as Demonte Posey’s explosive piano and Najee’s fluttering tenor sax paint a vivid picture of those oppressed in Mozambique. Of relevant note and in a completely different frame of mind, “Shinjuku” pays a delightfully funky homage to Najee’s touring days with George Duke in Japan.

While this Morning After worldwide fantasy is enticing and entertaining on many counts, there are a few distractions. “Paseo Nuevo” and “Trip to The Moon” provide decent smooth listening but miss the usually stimulating creative juices for which Najee is known. The arrangement on Najee’s salute to Paris, “Champs Elysees,” lapses during the first half before he wisely detours onto that electrifying Minneapolis Sound for a classic Prince/The Time-esque climax that should uplift the club devotees.

A welcome friend returns to The Morning After in Meli’sa Morgan, who accentuates the right balance of power and sultriness for the second single, “In The Mood to Take it Slow.” Reflecting Najee’s diverse moods, “W72 and Broadway” marries funk and be-bop, highlighted by ardent adlibs from Najee and a trio featuring Brian Bromberg. Though The Morning After journey lasts only under an hour, Najee plays a fairly compelling tour guide while sharing significant memories with his fans and anyone who just digs a fabulous fantasy. Recommended.
By Peggy Oliver
Top
Post Reply
1 post • Page 1 of 1