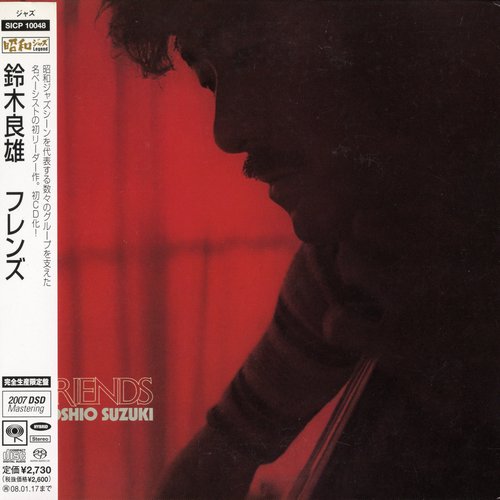 The debut album as a leader by Yoshio Suzuki featuring saxophonist Kohsuke Mine, pianist Takehiro Honda, drummer Hiroshi Murakami & special guest flutist Hideo Miyata. "Friends" is an essential japanese jazz masterpiece ranging from Hard Bop (The Past, K'S Waltz) to Modal jazz (Burning Point) passing by Bossa Nova (Samba De Chico), it includes only Suzuki's own compositions. Before to settle in New York in 1973, Yoshio was sideman for Sadao Watanabe, Takehiro Honda from 1969 to 1973, played for Masabumi Kikuchi, Yoshiaki Masuo (24 & Winds Of Barcelona) and Kimiko Kasai (What's New & Satin Doll). In US, he played alongside Stan Getz as his regular bassist, Sonny Rollins, Lee Konitz, Chet Baker and joined the famous Art Blakey and his Jazz Messengers. During 1999 to 2001, he was member of the Yuji Ohno Trio on the first three albums from the LUPIN THE THIRD [JAZZ] series.
Top
Post Reply
1 post • Page 1 of 1