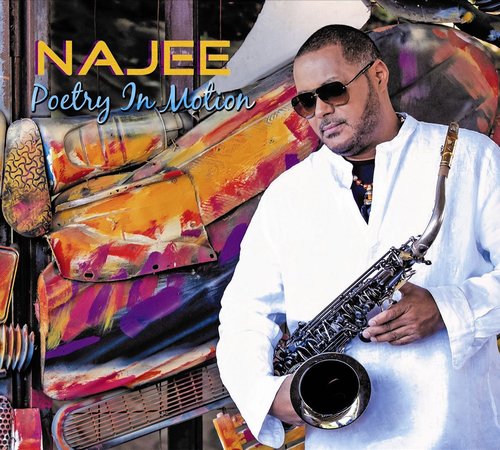 On Najee's 15th studio release, and fourth project for the Shanachie label, the Jamaica Queens, N.Y. native delivers an inviting, feel-good album on which he is joined by such diverse talents as pianist/keyboardist Bobby Lyle, multi-instrumentalist/producer/composer/arranger Barry Eastmond, multi-instrumentalist/composer/producer Jean Paul Maunick, vocalists Will Downing, Maysa and Eric Roberson, and guitarist Blake Aaron.

The multi-reedman's 1986 debut, Najee's Theme (EMI), was reflective of its time—an era when modern R & B grooves with jazzy inflections and rhythmic ambiance were new to the airwaves—and the 10-song disc Poetry in Motion, produced by Najee's good friend Eastmond, continues in that vein. It just updates the vibe a bit. Najee, who wrote or co-wrote seven of the selections, steps right up to the musical plate on his hypnotic soprano on the atmospheric opening tune, "Stratosphere." It's a beautiful number co-written with Eastmond, to which Najee imbues an aerial, reverie-like, above-the-clouds sound. It's befitting given that the reedman is a licensed pilot.

Najee switches gears in his flights of aerial fancy when he allows soulful vocalist Roberson to take the controls on the playful "Is It The Way." Co-penned by Roberson and Eastmond, it's a flirty but sensual song that discusses the nuances of tenderness in a relationship. It details tacit communication between two lovers who appreciate just the simple attributes about each other—a gentle reminder that it's the little things that make our relationships special, exciting, and enduring. Najee's soprano wafts and twists around the insistent melody, giving the tune the romantic aura of which it is most deserving.

There's more caressing, albeit in a funkier fashion, on the head-bobbing "Let's Take It Back." A highlight of the disc, it features the infectious, signature rhythmic sound of Incognito, featuring Maunick, who co-wrote it with fellow members of Incognito and Najee. This time Najee utilizes his brazen, commanding tenor sax (as well as background flute and saxophones). The sinewy groove takes the listener back to a simpler time in life. There's joy, laid-backness, and sophistication in the arrangement that showcases both Najee's and Incognito's unmistakable sonic signature. The result is a combo platter serving up of a chunk of R&B and funk on the top of the groove—which ensures that a good time is definitely in the mix.

Other notables are the tender dedication to two late, beloved musical icons: vocalist extraordinaire Al Jarreau, and the incomparable Prince on "We'll Be Missing You," a breezy, heartfelt track sung by the inimitable crooner Will Downing; the Quiet-Storm-like sensuous lead vocals of Maysa on "Don't Make Me Wait," and the up-tempo, cruising-like title track, on which Lyle and Najee partner one another in a style that flows and floats along with fervor. Guitarist Blake Aaron adds his punchy, uplifting sonic imprint to "Running Away." "Noche Romantica" finds Najee back on tenor sax on a fluid, Latin-tinged tune that conjures images of being on a sailboat en route to a beautiful, clandestine, romantic getaway.

The disc closes with the jubilant "Duology." Here Najee plays flute—an instrument which is a treat to hear him play as it has a similar appeal as his soprano saxophone. The only difference is that his flute work possesses a more haunting and ethereal quality. It's placed comfortably in a jazzy, funky setting that enhances the tune, giving it a spicy, irresistible flavor.

More than three decades after his debut album, Najee continues to entertain and titillate listeners. His work is a reassuring reminder that while time has marched along, Najee too has marched along confidently and entertainingly with it—without losing any of the brilliance that first put his music on the jazz map.
Review by Liz Goodwin
Top
Post Reply
1 post • Page 1 of 1