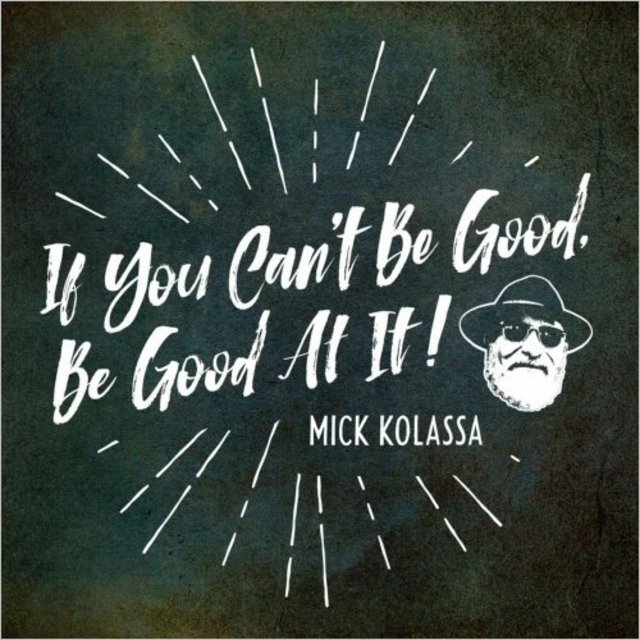 Michigan born Mick Kolassa has lived in the greater Clarksdale, Mississippi area for over twenty-five years. Kolassa is part of the local Memphis blues scene and a former member of the Board of Directors of The Blues Foundation. After years of songwriting Kolassa decided to record his debut album and enlisted his friend Jeff Jensen as producer. He realized his “labor of love” in 2014, releasing “Michissippi Mick” and donating all of the net proceeds to The Blues Foundation. Finding the process invigorating each year Kolassa would make another album with Jensen producing. The albums were critically well received by the blues community. In 2017 Kolassa recorded his fifth album “Double Standards”, an album of duets with Sugarray Rayford, Annika Chambers, Victor Wainwright, Tas Cru, Eric Hughes, Gracie Curran, Tullie Brae and others. More albums followed including his last album “Blind Lemon Sessions” released this past January.

This new album is Kolassa’s eighth. The initial sessions began in March. Kolassa, acoustic guitar and vocals was aided by a core band of Jensen, guitars and percussion; Rick Steff, keyboards; Bill Ruffino, bass; and John Blackmon, drums. Kolassa explains “we were joined by some incredible friends including Dave Dunavent guitar and vocals…and the amazing Willie Hall played drums… Then Covid hit and we had to stop cold, that was March 23rd. The break gave us time to really dig deeply into what we had and what we could do to complete it. Starting in June we regrouped.” Additional musicians include Brad Webb and Kern Pratt, guitars; Alice Hasen, violin; Eric Hughes, harmonica; Weston Caldwell, percussion; vocalist Tullie Brae; and the horn section of Marc Franklin, trumpet; and Kirk Smothers, saxophone.

The eleven tracks include nine Kolassa originals. Kolassa’s acoustic guitar and Steff’s organ open the Memphis styled “I Can’t Help Myself”; the horns punctuating the lyrics as Kolassa sings “can’t get you out of my head” before Jensen takes his guitar solo. Blackmon’s drums open the title track as Kolassa offers his advice “If You Can’t Be Good, Be Good At It”. Everything goes wrong for Kolassa as he sings “It’s a bad day for me but it’s A Good Day For The Blues” with a great extended solo from Jensen.

“I’ve Seen” is a humorous piece of songwriting that opens by Kolassa paying tribute to the blues masters before stating “what I really want to see, is you lying side me in the morning”. “We Gotta” continues the relationship theme, “we gotta’ chase the stars, gotta’ close down bars, we gotta’ catch the moon, gotta’ do it soon” before Franklin and Smothers take their respective horn solos. “Sweet Tea” is a song about Kolassa’s favorite beverage featuring Hughes on harmonica. The sexy minor key “Slow and Easy Love” follows with another great solo from Jensen. “Good Night Irene” is not the Leadbelly classic but an original that asks “was it a goodnight?”, once again featuring harpist Hughes.

The selected covers include James Taylor’s “Lo and Behold” from his career defining 1970 album “Sweet Baby James”; and a terrific version of Howlin’ Wolf’s 1960 song “Who’s Been Talking” featuring Willie Hall on drums, and an evocative Santana like solo from Jensen.

Kolassa once again proves himself a great songwriter and vocalist. He closes with one more original, the acoustic and intimate “She Kept Her Head Up”, written for and about his daughter Kassi and her clash with breast cancer “she kept her head up high while she was kickin’ cancers ass”.

Kolassa compares well to the best contemporary blues artists working today. He prefers however to remain home and continues to donate the proceeds from his recordings to the Blues Foundation. Whatever Kolassa does he is good at.
Richard Ludmerer
Top
Post Reply
1 post • Page 1 of 1