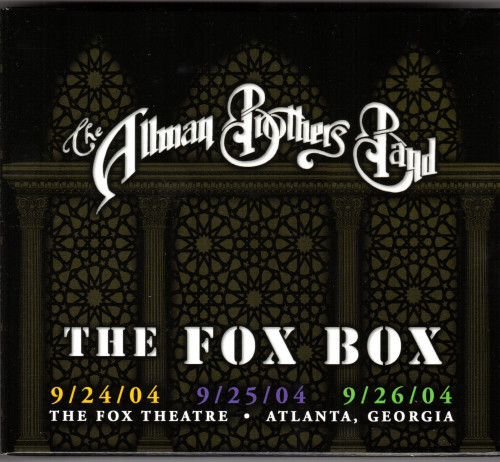 One might assume that only the most rabid fan of the Allman Brothers would shell out the cash for this live box set originally assembled by ABB merchandising arm Hittin' the Note from 2004 Instant Live concert recordings. After all, there are nine discs combining three separate Instant Live sets here; you could put the first one on with darkness falling in the early evening and finish the last disc with the first rays of the morning sun streaming in your window. "Play all night!" indeed. And yet despite the hours of music and the somewhat hefty price tag, The Fox Box sold out its initial 2004 run before being re-released in late 2005 (and again in 2017, remastered with some tightening of the song spacing, and trimmed down a bit from nine discs to eight). The set's apparent popularity is at least somewhat understandable, particularly among those seeking immersion in the kind of sprawling experience associated with the band in its heyday. After all, as demonstrated by classic double-disc vinyl sets like At Fillmore East and Eat a Peach, back then the Allmans played with such inspiration, expressiveness, and fire that no one would want to wrench them from the stage until they had wrung every last note from their axes, no matter how long it took. Given that the early-2000s band had its strongest lineup in years, a really extended live showcase (dwarfing the One Way Out double-CD set) might seem warranted to some -- and The Fox Box would surely seem to fit the bill.

The box does make a certain amount of sense from a packaging perspective. During their 2004 tour the Allmans could fill up three nights of music with very little repetition, so when they arrived at the Fox Theatre in Atlanta for a three-night run from September 24 through 26, they were able to bring a slew of different music to the ears of the faithful each night. There is some repetition -- three versions of "Dreams" (with a different guitarist taking the extended solo each time) and, most potentially daunting for the home listener, two of those very long drum breaks that were best experienced live to be fully appreciated -- but for the most part these nine discs tend not to overlap. Most importantly, there is often true inspiration in the playing and the choice of material, not to mention some genuine unpredictability amidst the sprawl.

On the first night, the Allmans bookended their show with the beginning and ending of "Mountain Jam," originally split between two sides of Eat a Peach, and the next night featured a similar decision, as they bracketed the show with the introduction and main body of "Les Brers in A Minor." Overall, the music is a nice mix of tried-and-true warhorses, then-recent material from their Hittin' the Note CD, and the occasional cover such as "I Walk on Guilded Splinters" and "The Night They Drove Old Dixie Down." Derek & the Dominos' "Why Does Love Have to Be So Sad?" seguing directly into the Dead's "Franklin's Tower" -- with a nice vocal from Oteil Burbridge and "Blue Sky" quotes from the guitars -- is a particularly potent pairing, and "Layla" -- featuring Derek Trucks on slide -- rightfully reclaims the tune as part of the Allman legacy, although the band tends to push the beautiful extended coda just a bit too far into the red. The band is on fire on the first disc of the September 26 show (including "Revival," "Every Hungry Woman," "Hoochie Coochie Man," and "End of the Line"); a fearsomely intense level of energy is achieved during Warren Haynes' "Elizabeth Reed" solo; and the interplay between guitarists Trucks, Haynes, and Jack Pearson on the "Mountain Jam" reprise is pure musical bliss, nostalgic perhaps but that's just fine, as memories of the most beautiful call-and-response dialogues between Duane and Dickey are conjured up. And speaking of Dickey Betts, his finest early songs are here even if his guitar and singing aren't, and Gregg Allman's vocals, quite frankly, provide some soulful heft to a countrified classic like "Blue Sky" without weighing the tune down.

Still, the Instant Live approach had its shortcomings. The band is recorded well, but whoever was responsible for miking the audience on these recordings, apparently to make sure there was plenty of concert ambience, should have either turned those mikes down or unplugged the damn things completely. As in the early days, the 2000s-era band was capable of some subtlety, but unlike those early days, certain members of the 21st century audience apparently felt that quieter moments were precisely the best times to scream their friggin' heads off. Hey, everybody loves a party, but why give these particular crazies such prominence in the mix? (Oh, that's right -- they're the ones who bought the CDs after the shows were over.) Other quibbles: track indexing needlessly split the "Mountain Jam" reprise in two (a problem thankfully fixed in the 2017 reissue), and while the drum break that stretched a killer "Elizabeth Reed" out past the 30-minute mark was a fine showcase for one of the strongest percussion sections in all of rock, a similarly long drum interlude pushing a hot little blues-rocker like "Black Hearted Woman" to nearly half an hour might seem unnecessarily redundant for some home listeners.

Regardless, The Fox Box showcases practically everything that the 21st century Allmans could present at their most epic, revealing a band in astoundingly good shape 35 years after its founding. Hearing the group stretch out in 2004 could be a wonderful experience, although if you pop for The Fox Box you might ultimately wish you could edit portions out. There's an absolutely classic four- or five-CD set here, scattered inconveniently across twice as many discs. Unfortunately, the Instant Live concept made the best stuff difficult to isolate, and The Fox Box -- in its original incarnation at least -- was thus a strange mixture of joy and aggravation.
Review by Dave Lynch
Top
Post Reply
1 post • Page 1 of 1