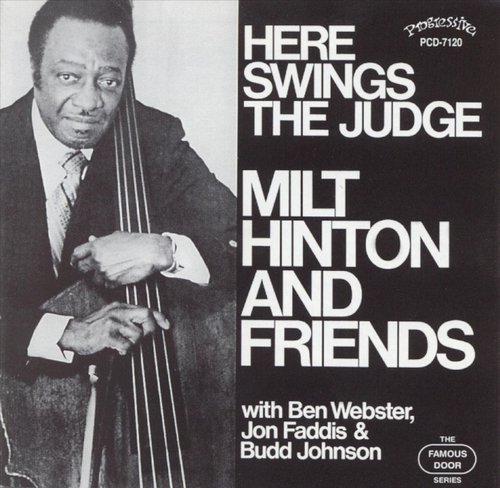 Milt Hinton was probably the most recorded bassist in the history of music as a whole, but relatively few recordings were released under his own name. This LP was his first as a leader (if you don't count an earlier duo LP with Jo Jones) and it consists of private recordings that Hinton made with tenor saxophone great Ben Webster prior to Webster's departure for Europe in 1964; the remaining tracks come from a Harry Lim-produced studio session featuring Budd Johnson, Frank Wess, Jon Faddis, John Bunch, and Jo Jones. Although the sessions by Hinton and Webster are informal in nature, they are very rewarding. Their duo performance of "Sophisticated Lady" takes on a new degree of subtlety compared to Webster's better-known recordings of this masterpiece by Duke Ellington. Their take of "All the Things You Are" picks up the pace quite a bit, featuring some masterful playing by both men. Stories about Webster's affinity for playing stride piano after hours are widespread, but the two tracks on this LP that feature the saxophonist on a rather weathered instrument are among the few examples to actually have been commercially released, even if the recording itself (and especially the instrument) are not as high quality as one might hope. The Lim-produced sessions begin with a turbulent but swinging "Blue Skies" featuring both Wess and Johnson on tenor saxes, with the young firebrand Faddis on trumpet. Johnson switches to baritone sax for Hinton's "Blues for the Judge," a slow savory blues. Faddis' mute work and open horn are highlights of the unusual arrangement of "It Had to Be You," along with the leader's incredible basslines and Bunch's superb piano. This LP which disappeared from print with the death of Harry Lim, the founder and owner of Famous Door, was reissued on CD by Progressive in 2001.
Review by Ken Dryden
Top
Post Reply
1 post • Page 1 of 1