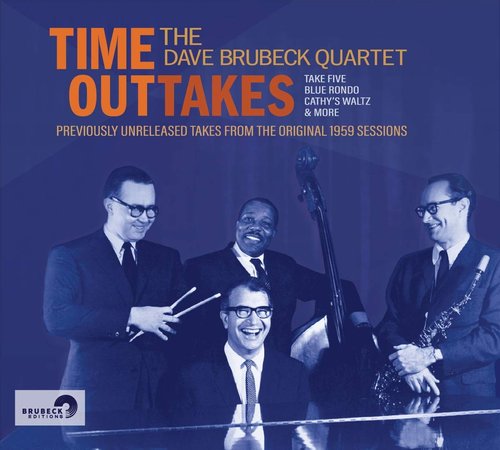 Discovered during the research for several books marking Dave Brubeck's centennial celebration, Time Outtakes features never-before-released songs recorded during the original sessions for the pianist's landmark 1959 album Time Out. This is Brubeck's classic quartet featuring alto saxophonist Paul Desmond, bassist Eugene Wright, and drummer Joe Morello. While there have been several special edition versions of Time Out released over the years, none have included these original studio recordings from the 1959 sessions. One of the most influential and commercially successful jazz albums in history, Time Out is largely considered a perfect album, a showcase for Brubeck's innovative use of time signatures, as well as rhythms and melodies borrowed from Eastern and African musical traditions. At the center of the album was "Take Five." A kinetic 5/4 masterpiece written by Desmond, the song became an instant classic, dichotomously building mainstream interest in world rhythms while also pushing jazz musicians to embrace yet more wide-ranging and intellectual sounds. What's particularly compelling about these recordings is just how different they are from the ones that ended up on the final album. "Take Five" itself is much faster than the classic version, starting out with a more spare drum pattern and featuring a more avant-garde leaning solo from Desmond. In keeping with the song's original purpose as a showcase for Morello's drumming, here the band drops out when he starts his solo. Unmoored from Brubeck's piano vamp, he plays with the groove, ably turning the rhythm inside out with a mix of percussion sounds before inviting the band back. Equally eye-opening is "Blue Rondo a La Turk," which, while not that dissimilar to the classic version, is in some ways superior, featuring an even more organically supple groove and expansively bluesy solo from Desmond. Along with alternate takes, we get several songs not included on the original album, including the off-the-cuff "Watusi Jam" and the spritely "I'm in a Dancing Mood." While certainly a fascinating window into the development of a jazz classic, Time Outtakes is also just a superb listen.
Review by Matt Collar
Top
Post Reply
1 post • Page 1 of 1