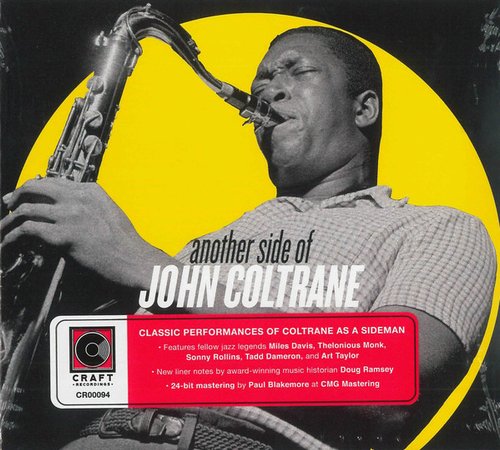 While John Coltrane’s legacy largely focuses on his innovative and influential work as a leader, the saxophonist and composer began his career as a highly respected sideman, who rose to fame playing alongside some of the greatest names in jazz. Craft Recordings’ forthcoming release, Another Side of John Coltrane, set for release on August 20, explores this aspect of the trailblazing artist’s career and spotlights some of his best work in sessions led by Miles Davis, Thelonious Monk, Sonny Rollins, Red Garland, Tadd Dameron, and Art Taylor.

Another Side of John Coltrane will be offered on vinyl as a 2-LP set, on CD, and across digital platforms. A collectible, yellow-colored pressing (limited to 500 copies) can be found exclusively at craftrecordings.com, while Barnes and Noble will offer an opaque gray exclusive (also limited to 500). The vinyl editions include two bonus tracks, not featured on the CD or digital: “Nutty” (from Thelonious Monk with John Coltrane) and “Birks’ Works” (from Soul Junction by the Red Garland Quintet ft. Coltrane and Donald Byrd).

The collection is produced by Nick Phillips, mastered by the Grammy-winning engineer Paul Blakemore, with lacquers cut by Clint Holley at Well Made Music. Another Side of John Coltrane also includes new liner notes by the award-winning journalist, author, and Jazz Journalists Association’s Lifetime Achievement Award recipient, Doug Ramsey.

Coltrane launched his musical career a decade earlier, sharing the stage with leaders like King Kolax and Jimmy Heath, followed by Dizzy Gillespie, Johnny Hodges, and even his idol, Charlie Parker. But a call from Miles Davis in 1955 changed the course of his life. Davis was forming a new band and invited the promising young saxophonist to join him, along with Garland, Chambers, and Jones. Known as the “First Great Quintet,” the legendary group recorded a string of highly regarded titles over the next two years, including the Relaxin’, Workin’, Steamin’, and Cookin’ series for Prestige.

This was also a period of significant artistic growth for Coltrane. In a 2001 New York Times feature, critic Ben Ratliff argued that during Coltrane’s early years as a sideman, he “didn’t particularly distinguish himself; for the most part, he can barely be heard. But…recording with Davis…he had a sound.”

Ahead of the release, fans can check out “Oleo.” Written in 1954 by Sonny Rollins, who—like many jazz artists—based the composition on the chord structure of George Gershwin’s “I Got Rhythm,” the high-energy tune has since become a standard. This particular version, which appeared on Relaxin’ with the Miles Davis Quintet, was recorded in October 1956 at Rudy Van Gelder’s studio in Hackensack, NJ, and features Davis on trumpet, Coltrane on tenor sax, Red Garland on piano, Paul Chambers on bass, and Philly Joe Jones on drums.

The take opens with a false start, followed by brief chatter between the musicians before they launch into the hard-bop staple. In his liner notes, Ramsey observes, “Following Davis’ crisp initial chorus of improvisation, Coltrane begins a conversational solo, at first with only Paul Chambers’ bass as accompaniment. He rides on the inspiration of a rhythm section that became a model for bands around the world.”

Another Side of John Coltrane also includes several highlights from Miles Davis-led sessions, including a 1956 recording of the Sonny Rollins-penned “Airegin,” and Thelonious Monk’s classic “‘Round Midnight.” The latter recording, captured in 1956, originally appeared on Miles Davis and the Modern Jazz Giants. Ramsey writes that Coltrane’s solo in this take “has the keening quality that was integral to his work in the mid-fifties, and the churning examination of the possibilities in chords that would take on greater intensity as the decade unfolded.”

This era also found Coltrane collaborating with another jazz virtuoso, Thelonious Monk. In 1957, he joined the pianist nightly for a six-month residency at New York’s Five Spot Café. “Working with Monk brought me close to a musical architect of the highest order. I learned from him in every way,” Coltrane later told Downbeat. While the two titans only recorded a handful of sessions together—all of which occurred in ’57—those subsequent albums stand as revered works in the genre.

Another Side of John Coltrane includes choice cuts from this pairing, including the ballad “Monk’s Mood” (off Thelonious Himself), in which the two are accompanied by bassist Wilbur Ware, as well as the Monk standard “Epistrophy” (off Thelonious Monk with John Coltrane), featuring Ware on bass, Ray Copeland on trumpet, Gigi Gryce on alto sax, Art Blakey on drums, as well as Coltrane and Coleman Hawkins on tenor sax.

Coltrane also shines with fellow saxophonist Sonny Rollins on the iconic “Tenor Madness”—the only known recording of the two saxophone giants together—which appeared on Rollins’ synonymous 1956 album. Ramsey notes that the recording “provides a prime opportunity to compare Rollins’ and Coltrane’s styles, particularly toward the end when they trade a series of four-bar phrases.” In his New York Times piece, Ratliff elaborates “Coltrane is just beginning, constructing an onrushing solo in distinction to Mr. Rollins’ series of pointed, clean melodic improvisations.”

Other highlights in this collection include “Soultrane,” with pianist and composer Tadd Dameron. Named in honor of the saxophonist, the track appears on 1957’s Mating Call, which Ramsey, declares, boasts “some of [Coltrane’s] most bewitching work.” Listeners will also enjoy the interplay between Coltrane and drummer Art Taylor on “C.T.A.,” off 1957’s Taylor’s Wailers, while the saxophonist joins his Miles Davis Quintet bandmate, Red Garland, on “Billie’s Bounce,” off 1957’s Dig It!

Although Another Side of John Coltrane primarily focuses on sessions captured between 1956–1957, the album also features one additional standout performance, recorded well into Coltrane’s career as a respected leader. The song—a rendition of “Someday My Prince Will Come” from the 1937 Disney animated film Snow White—is a classic in Davis’ cannon, thanks in part to an otherworldly solo by Coltrane, who joined his former boss in the studio for two tracks on the subsequent 1961 LP, Someday My Prince Will Come.

In May 1957, the artist recorded Coltrane—his first album as a leader—soon followed by such early landmarks as Lush Life, Soultrane (both 1958), and Giant Steps (1960). While Coltrane would profoundly change the landscape of modern jazz, these foundational sessions capture the development of his sound. As Ramsey eloquently puts it, these recordings offer listeners an opportunity to experience “his ceaseless inventiveness as he expands his harmonic palette and takes increasingly greater chances in developing his solos.”
Review by Tim Peacock
Top
Post Reply
1 post • Page 1 of 1