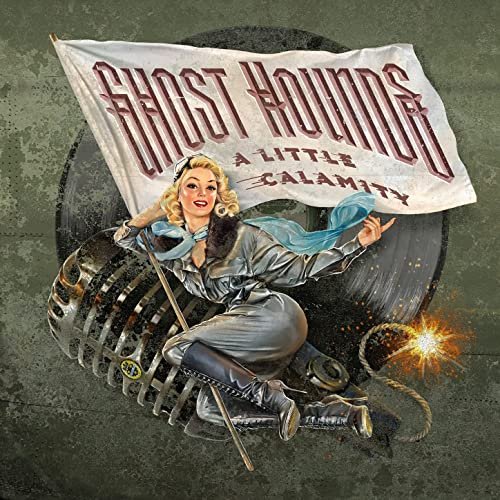 Ghost Hounds are currently one of the most promising American blues rock bands. Originally founded nearly 17 years ago by guitarist Thomas Tull, the band reformed in 2018 and since then has been enjoying significant acclaim, having opened for acts such as The Rolling Stones and ZZ Top and releasing the excellent album Roses are Black (which featured the participation of heavyweight musicians like Slash, for example). In addition to Tull on rhythm guitar, The current band consists of lead guitarist Johnny Baab, drummer Blaise Lanzetta, bassist Bennett Miller, keyboardist Joe Munroe and lead singer Tré Nation. Together, they present their newest release, A Little Calamity. The record has the band at the highest level, and their power-packed blues rock sound, once again, doesn’t fail to impress.

First of all, the production quality is extremely high. Producers Kevin Bowe and Thomas Tull along with mixer Vance Powell excelled at making the instruments sound crystal clear and vibrant. With that underpinning, the music resonates with power. And now speaking of the music itself, the album is filled with amazing material that will most likely please both old and new generations of rock fans. This happens because the band merges with precision their classic blues and rock influences with fresh and robust songwriting and attitude. Let us examine some of the tracks to illustrate this.

The album opens with the southern rock-inspired number “Half My Fault”. A thrilling cut that has the blazing guitar work and Tré Nation’s soulful vocals stealing the show. The second track is “Between Me And The Devil”, the album’s first single. This rip-roaring, riff-driven, mid-speed rocker, whose lyrics refer to the legend of Robert Johnson’s Faustiadn bargain, is blues rock at its best. Powerful riffage, memorable vocals, and fiery piano work are the song’s most remarkable aspects, even though these are only made possible by the rhythm section’s tight delivery. The third track and second single is the catchy, country-rock number “Good Old Days”. The meaningful lyrics, flawless musicality, and captivating chorus make this cut one of the album’s highlights.

Another standout cut is “Tears For Another”, the fifth track. This memorable slow blues number features some blistering leads and another impeccable performance by Nation. “Little Calamity” is a dancing, catchy rocker with some more impressive lead guitar work. “Thunder Road”, a cover of Bruce Springsteen’s anthemic song, is a beautiful tribute to The Boss. Featuring singer Sasha Allen and gracefully executed, the song carries the listener into an emotional journey.

A Little Calamity is arguably one of the best albums of the year and one more offering that demonstrates why rock music is far from dead. And Ghost Hounds, as it seems, are just getting started.
by Fidel Beserra
Top
Post Reply
1 post • Page 1 of 1