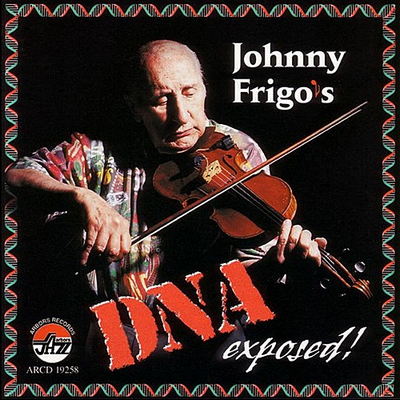 Without resorting to forensics, Frigo's DNA can easily be traced to Joe Venuti, Russell Procope, Eddie South and, of course, Grappelli. Traces of all their DNA can be found on every track of Johnny Frigo's DNA Exposed!: the inescapable bent tones; the near-conversational dynamics of phrasing; the very forgivable straying from intonation (portamento?) that renders it a solo instrument by preference; and when you blend the previous, an inevitable sense of musical humor.

Talk about humor: 12 of the 13 tracks are basically golden oldies. Frigo's sole contribution as a writer is "Hair on the G-String," with its Monkish, bow-in-cheek head. The most intensely swinging cuts are "Cheek to Cheek," "She Loves Me" and Dizzy's "Tanga." The most fascinating track is Chick Corea's "Crystal Silence": pianist Bill Charlap is at his most rhapsodic and Frigo furnishes tasteful tremolos and other effects.

Bucky Pizzarelli provides sensitive, descending support just where it's needed on "What Is There to Say?" Frigo provides his own Asian pizzicato for the intro to "Poor Butterfly." The support from guitarist Frank Vignola, bassist Nicki Parrott and drummer Joe Ascione never disappoints. It's such a civilized album of gentle swing from a less complicated era.
Top
Post Reply
1 post • Page 1 of 1