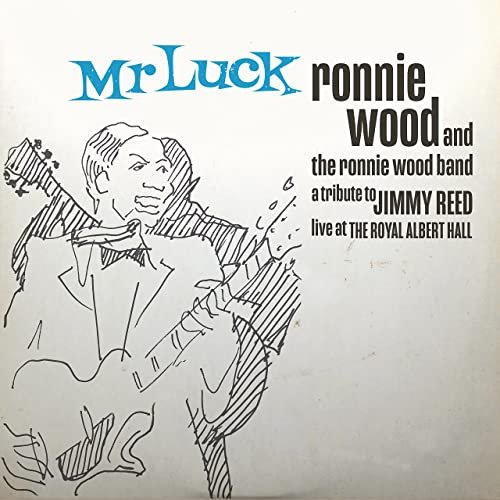 “Jimmy Reed was one of the premier influences on the Rolling Stones and all the bands that love American blues from that era until the present day. It is my honor to have the opportunity to celebrate his life and legacy with this tribute.” – Ronnie Wood.

Ronnie Wood is nothing short of a Rock N’ Roll Legend. He is a two-time Rock N’ Roll Hall of Fame inductee with the Faces and The Rolling Stones. Wood has carved his place in music history as one of the greatest sidemen of all time. That being said, he also has an impressive catalog of solo material that spans back to the ’70s.

Mr. Luck is the second in a series of Live Recordings from Wood paying homage to his influences. The first being Mad Lad: A Live Tribute to Chuck Berry. Recorded in 2013, Mr. Luck features an impressive lineup of special guests including Mick Taylor, Bobby Womack, Mick Hucknall, and Paul Weller and pays tribute to one of Ronnie’s biggest influences Jimmy Reed. Reed was an electric blues pioneer who had an impressive career of his own as a member of Muddy Waters’ band and as a solo artist. Like many musicians from Wood’s era, the Blues had a major influence on most of the artists involved with the British Invasion of the ’60s. The fondness of the Blues from most of these artists helped spark a revival of Blues Music in America that is still going to this day.

The Blues is a genre of music that was born out of pure emotion. Traditionally one of the goals of the Blues has always been to lift one’s spirits or convey a feeling to the listener. This release does that, Mr. Luck captures the spirit of the early blues records and reminds the listener of the originators of the genre. The release starts off with “Good Lover”, a blues shuffle that is a great introduction to the live recording. The grit of Wood’s voice is a nice compliment to the seasoned musicianship on the recording. The title song “Mr. Luck” gets a very enthusiastic round of applause from the audience, and is one of the better songs on the release. At this point, the band seems to be settling into a groove and from what I would imagine are having a blast playing homage to Jimmy. “Shame Shame Shame”, one of Reed’s most recognizable songs was often played live by The Rolling Stones in their early appearances. This version features Paul Weller and “Big Boss Man”, another Jimmy Reed Classic features Bobby Womack of the Valintinos fame, who penned The Rolling Stones first UK hit “It’s All Over Now”. “Roll and Rumba” is an instrumental track that lets the musicians stretch out a little bit and have a moment to shine on the release. “Got No Where to Go” is a slower traditional blues number that features both tasteful guitar and harmonica solos. During this track, Wood also pays homage to The Rolling Stones Lyrically and is another stand out track on the release. “I Ain’t Got You” has a great piano solo and is another example of the musicians stretching out a little bit and having fun.

Mr. Luck is a snapshot in time that captures a Rock-N-Roll legend paying tribute to a Blues Master. Wood has a distinct swagger and recognizable approach to playing music and that holds true on Mr. Luck. Every song is a recognizable blues classic and captures the essence of the what I feel Wood was trying to accomplish with this release… paying tribute to one of his biggest influences. If you are looking for an edgier guitar shredding blues record this may not be for you, but if you are looking for a release that captures the embodiment of the great blues songs played by seasoned veterans then this may be just what you are looking for. Mr. Luck is a very good release that gives the listener a glimpse into the golden era of the blues.
by Jamie Warden
Top
Post Reply
1 post • Page 1 of 1