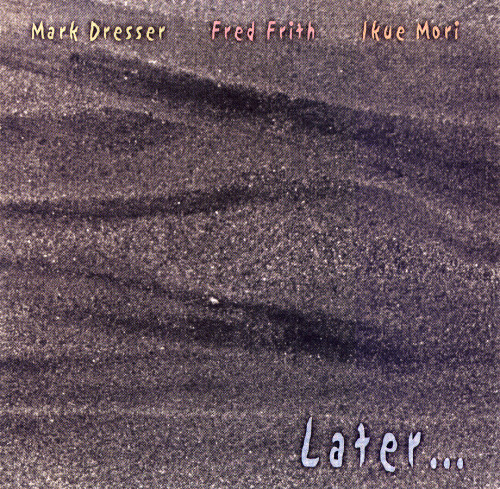 This could also have been called Night of the Angel Killers. First of all there's Dresser, a bassist who plays the instrument like a drum and a guitar simultaneously. Next, Fred Frith who brought his entire bag of tricks to this gig in 1994: there's his electric guitar, but his guitar-on-the-table, his piano, an organ, and his violin. Finally, the most interesting part of this trio is Ikue Mori and her drum machines. While there are nine titles here, or selections, this is one long show where noodling, amusement, audience taunting, and true group improvisation take place. There is at least 15 minutes where everybody is trying to feel each other out in this trio. They aren't so worried about making coherent sonic statements as they are in investigating what the other two have to offer during the set. About 25 minutes in the heat gets turned up before it turns into a free for all that melts molten steel. Stuff is flying around so fast and furious, particularly from Mori and Dresser it turns out it was a good thing that Frith brought his arsenal just to be able to participate. Mori has so many sounds for a person who plays drum machines. She underscores Dresser's bowing with an atmospheric texture so pliable, it allows him to create a polyrhythmic response before Frith starts sawing away on the violin to move it up another notch! By the time we are into the last ten minutes or so, everything begins to come back toward some semblance of sonic reality, but only so far. Mori and Frith now are stretching concepts of time and space, as Dresser is content to pad his way through to the end, which is just what he should do. Movement is no longer delineated by rhythm, but by empty space and the few items left to fill it. The set whispers to a close just before one final bang from all three and the listener (as I suppose the audience was also) left wondering just what it was they just witnessed with their ears and minds. Later... is a completely joyous outside effort from a trio of fires from inner worlds.
review by Thom Jurek
Top
Post Reply
1 post • Page 1 of 1