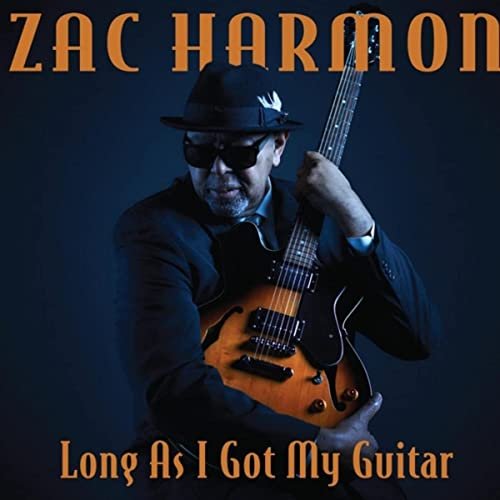 A living link to blues history and an award-winning blues singer, guitarist, Zac Harmon is set to release Long As I Got My Guitar on October 1st on Catfood Records, produced by Grammy-winner Jim Gaines (Santana, Stevie Ray Vaughan, Journey.) Long As I Got My Guitar features ten songs performed in Harmon’s inimitable funky, soul-blues style. Backed by his regular touring group plus Catfood Record’s owner Bob Trenchard (bass), Richy Puga (drums), Johnny McGhee (guitar) Dan Ferguson (keyboards) and SueAnn Carwell and Corey Lacey (background vocals), the tracks were co-penned by Harmon and Trenchard. The new album is a follow up to his 2019 Mississippi Bar BQ, released to critical acclaim.

Harmon started a solo career after working as a studio musician, then songwriter and producer. He contributed to major films, TV shows and national commercials. Harmon wrote songs for Troop, Karyn White, Evelyn “Champagne” King, Freddie Jackson, the Whispers, K-Ci & Jo and the O’Jays. He wrote and produced songs for reggae band, Black Uhuru’s Grammy nominated album, Mystical Truth. After composing and performing blues songs for a movie score, Harmon embarked on recording his first blues project, 2003’s Live at Babe & Ricky’s Inn. Multiple awards later by The Blues Music Awards and others plus several acclaimed album releases, Harmon’s new Long As I Got My Guitar is a fine record, showcasing why Harmon has become one of the Blues’ strongest live performers.

Harmon grew up in the Farish Street district of Mississippi, home of Elmore James. Harmon’s mother played piano and, in her role as pharmacist, tended to such legendary figures as Muddy Waters, Albert King and Little Milton. Next door lived a music instructor who regularly hosted Duke Ellington and Cab Calloway. Another neighbour, Bill Farris, recorded Skip James in his home.

“Deal With The Devil” wastes no time in stirring up some fine, smouldering blues-rock. Harmon’s guitar is front and centre, effortlessly spitting out fiery licks. Harmon’s vocals are a delight, smoother and more rounded than many a blues singer, veering more towards the classic Stax soul sound. The band keeps the arrangement airy and light, with plenty of shuffling percussion and moments of nuance, lending a wonderfully polished sheen to the track. Trenchard is no slouch on bass, but Harmon is undoubtedly the star. “Crying Shame” shifts the pace a little, slowing things down to a lovely country-blues tempo. The song washes through like a cool breeze. Harmon’s voice alone would be enough to keep you hooked, but the relaxed ensemble playing feels just as fresh.

“This probably is the most memorable record of my career,” reflects Harmon. “Bob Trenchard and I were so much on the same page with all that we went through in 2020 that it spawned some incredibly emotional song testimonials.” “Ashes To The Wind” is a fine case in point, a remarkably affecting blues-soul number which rolls by with loving energy, stirring up shadows of the great 60s and 70s soul-men. It’s the little touches which will draw you in, but the glue that binds this music tight is the aforementioned unity between the players. Honesty and togetherness imbue this entire album with a warm radiance which is never less than charming.

The title-track smokes and swaggers. Harmon displays wonderful acumen, firing off riffs and runs with consummate ease. “Soul Land” brings more of a laid-back, 80s style, reminiscent of the work of Stevie Wonder. “Everything around me sings in harmony,” sings Harmon and you can’t help but agree. “Imagine A Prayer” sparkles with keyboard vamps, passionate vocals and harmonies. The variety here is part of this album’s appeal. Paired with fantastic playing and open-hearted delivery, there’s much to savour. “After a year of picking up my guitar and then putting it down,” says Harmon, “I finally realize that as long as I got my guitar, all is good with my soul.”
By Chris Wheatley
Top
Post Reply
1 post • Page 1 of 1