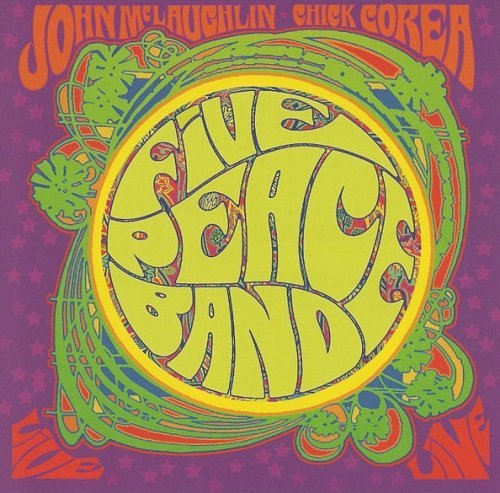 Superstar collaborations often look good on paper but don't pan out in reality, so it's a real pleasure to see that the pairing of two modern legends—keyboardist Chick Corea and guitarist John McLaughlin—is far more than some marketing representative's wet dream. Teaming with three younger players who add their own cachet—saxophonist Kenny Garrett, bassist Christian McBride and drummer Vinnie Colaiuta—Five Peace Band Live captures the group on the first leg of a nearly year-long tour, hot on the heels of Corea's much-lauded Return to Forever reunion, documented on Returns (Eagle Records, 2009). While FPB Live isn't as pedal-to-the metal fusion as Returns, there's no shortage of high-octane playing, as the quintet works through a number of originals, a couple of standards and a fine tribute to Miles Davis, who brought Corea and McLaughlin together for the first time 30 years ago on In a Silent Way (Columbia, 1969).

Comparing FPB with McLaughlin's 4th Dimension group, the two tracks covered by both bands yield significant differences. The fiery "Raju" doesn't change much, though Garrett nearly blows the roof off whatever venue it was recorded in, lending considerably more weight to the song. Colaiuta and McBride are equally powerful, while Corea's personality gives the tune some additional harmonic movement.

"Senor C.S.," on the other hand, is reimagined as a high velocity samba, beginning with a Corea/McLaughlin duet that demonstrates the simpatico bond that makes this pairing long overdue. Despite McLaughlin's lightning-fast yet always lyrical delivery, it recalls Corea's early, Latin-esque Return to Forever—although the late Joe Farrell never played with as much unbridled passion as Garrett, who comes close to stealing the show from Corea and McLaughlin on more than one occasion. Meanwhile, "New Bruise, Old Blues," from Industrial Zen (Verve, 2006), is as funky as FPB gets, with one of Corea's most visceral synth solos of the set.

If McLaughlin's tunes are more fusion-centric, Corea's two contributions take FPB closer to the modern mainstream, with "The Disguise" more down-the-middle, but proof- -as if any was needed—that McLaughlin can still work that turf with ease. "Hymn to Andromeda" begins freely, Corea working in and out of the piano box as McBride enters to deliver a poignant arco solo before the rest of the group joins to gradually move into modal territory, with Garrett delivering another set highlight, gradually building his solo as the band coalesces and intensifies behind him.

Alongside a quirky rearrangement of Jackie McLean's "Dr. Jackle" and a closing Corea/McLaughlin duet on "Someday My Prince Will Come," the group pays tribute to Miles on a lengthy, more open-ended rework of "In a Silent Way/It's About That Time," with Herbie Hancock guesting to create an ethereal electric piano cushion before the band enters in the more propulsive second half, with McLaughlin proving himself as able an accompanist as he is an evocative soloist.

Running the gamut from straight-ahead to balls-out fusion, Five Peace Band Live is a rare opportunity to hear two masters create something that references both of their careers but combines to create something with its own distinct personality.
BY JOHN KELMAN
Top