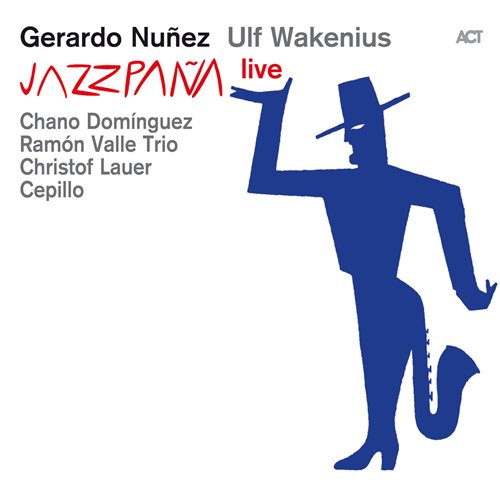 “Music for people with open ears and open minds. Far removed from a predefined style. Without any fear of mixing genres.” In 1992, this was the understanding of jazz that producer Siggi Loch based the launch of his ACT adventure on. The label’s very first recording, Jazzpaña, was to become a milestone and synonym for ACT’s philosophy, and became a double Grammy nominee in the process.

Jazzpaña brought the stars of the “Nuevo Flamenco” from Spain together with US jazz greats such as Michael Brecker, Peter Erskine and Al Di Meola, backed by the sound of the WDR Big Band. The arrangements came from Vince Mendoza, though a little-known artist at the time, he is now one of the most versatile and prolific composer-arranger-conductors of the last two decades, a multi-Grammy Award winner who has written arrangements for everyone from Joni Mitchell, Sting, Elvis Costello and Bjork to Joe Zawinul, John Scofield and Charlie Haden.

12-time Grammy winner and star producer Arif Mardin, who throughout the course of his career worked with greats such as Aretha Franklin, Whitney Houston and Norah Jones, completed the set with a suite of his own.

Jazzpaña sought to connect the unexpected, in this case Flamenco and Jazz, and one album became two in 2000 with a smaller, but no less prominent line-up. Jazzpaña II was led by Gerardo Núñez and Chano Domínguez and peppered with soloists like Jorge Pardo, Perico Sambeat and again Michael Brecker. Once again, it was a huge success: “Grandiose Musik” proclaimed Germany’s esteemed magazine Der Spiegel.

Now, 15 years on from Jazzpaña II, and over two decades since the original idea was conceived, ACT presents Jazzpaña live. This latest chapter in the Jazzpaña story was recorded live from both the Berlin Philharmonie Kammermusiksaal and WDR 3 Jazzfest in Dortmund. For this concert, once again both Jazz and Flamenco combine through Spanish Guitarist Gerardo Núñez, considered the heir apparent to the great Paco de Lucía, and Swedish guitar virtuoso Ulf Wakenius, however this time a third element, Cuba, is added courtesy of Cuban pianist Ramón Valle.

His trio explores the close relationship between Hispanic music and the music of Andalusia, with the results particularly impressive on “Siboney”, an homage to the greatest of all Cuban composers, Ernesto Lecuona.
Top
Post Reply
1 post • Page 1 of 1