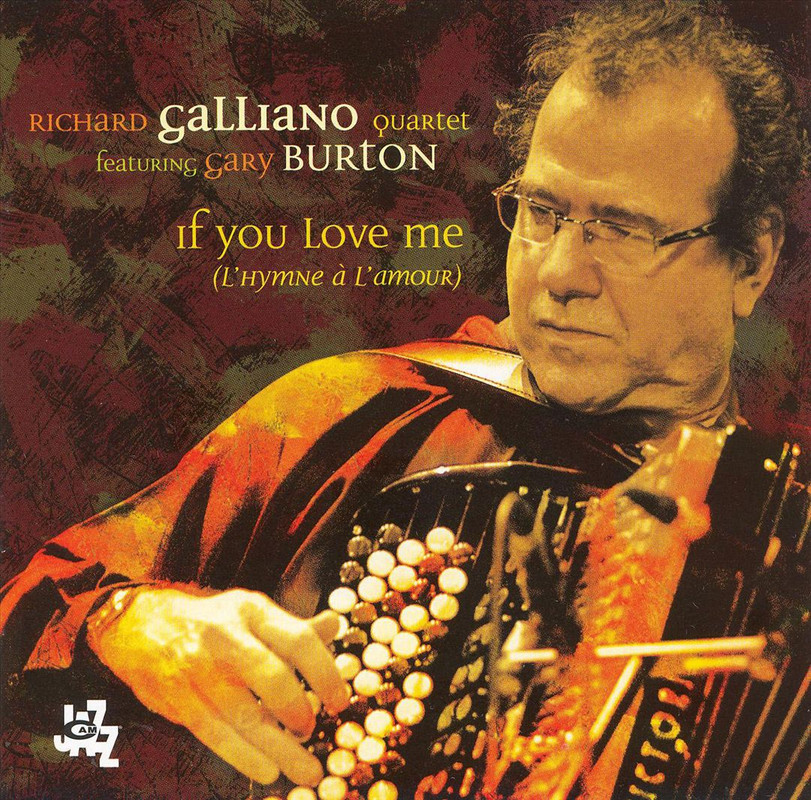 Richard Galliano long ago staked his claim as the heir apparent to the late Astor Piazzolla, the undisputed icon of tango music. But the French Galliano has never been an imitator and has always sought to push the music beyond what the Argentinean Piazzolla might have considered. As an accordionist, Galliano has not only absorbed the essence of Piazzolla but expanded the possible permutations of the instrument within the tango setting, and he's done that by placing it within a jazz context. Galliano doesn't so much adhere to a recognizable jazz framework as cherish the art of improvisation endemic to jazz, and on If You Love Me he's achieved the perfect synthesis by teaming with the renowned vibraphonist Gary Burton, with George Mraz on bass, and with Clarence Penn on drums. It might seem, in theory, that the accordion and the vibes would be an oil-and-water mix, but these two virtuosi make it work -- there's a natural flow from one sound to the other and a shared sense of purpose that turns each track into a serene thing of beauty. Much of the program derives from the master's catalog -- five of the ten songs are Piazzolla compositions. But Galliano and Burton also take on J.S. Bach (Sinfonia 11 in G-Moll, BWV 797), Edith Piaf (the title track, listed in French as "L'Hymne à l'Amour"), and Bill Evans (the classic "Waltz for Debby") and integrate them so seamlessly that they are easily of a piece with the Piazzolla tunes. The theme from the film Il Postino, which closes out the set, is melancholy and minimal, hinting at yet another direction this unlikely pair might go should they decide on a sequel.
Top
Post Reply
1 post • Page 1 of 1