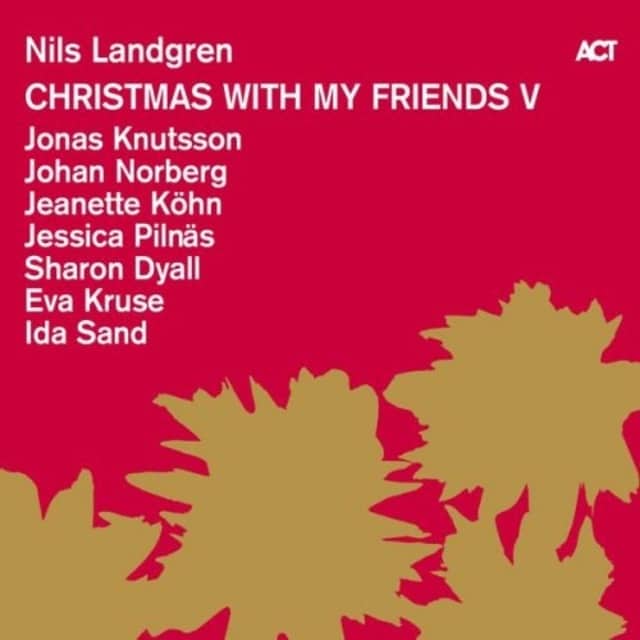 Fans of Nils Landgren will know him as Mr. Redhorn. This dare-devil Action Man drives his Funk Unit heroically from the front, sweat bejewelling his forehead. That, however is just one of the many sides of this popular and immensely likeable Swedish trombonist and bandleader. The master of the in-the-pocket groove also has a much softer, more romantic side. This sentimental mode found its most natural and effective method of expression in a thought he had exactly ten years ago. Landgren’s idea was not just a good one, it was a keeper: he would gather good friends around him, and they would celebrate Christmas together, through music.

So, in 2006, on went the red satin dinner jacket for the very first time, and “Christmas With My Friends” was born. The concert in the ancient Odensala Church in Stockholm was recorded, and then issued as a CD. It was to prove the beginning of an unprecedented success story. Every two years, Landgren took himself off on a Christmas season tour, alternating between Sweden and Germany. Four albums have chronicled this developing story, and each of them has in its turn been awarded with the German Jazz Award. Three of them have gone platinum, and the most recent (so far, watch this space...) is currently gold. The press and the public got right behind these albums from the start. The widely-read German current affairs magazine Stern garlanded “Christmas With My Friends” with the description of “the most beautiful of all the Christmas CDs of the year,” praising its “unique, bright, sparkling, festive atmosphere that goes straight to the heart." Stern was just as fulsome in its recommendation of the second album: “Our verdict is still the same. This one also glistens like a starry Nordic winter night sky.” The UK critic Dave Gelly writing in the Observer has praised the albums as follows: “There is an irresistible feeling of serenity and calm about the whole thing”...” “Landgren’s concept of a Christmas album is so much more sophisticated than the norm that it's the only possible choice for this season” …. “The secret lies in the combination of simple intimacy, polished musicianship and a programme full of subtly chosen surprises.” A visit in person to one of these concerts, often held in resonant churches, almost always completely sold out, gives a sense of the special mood they create: in the audiences are always radiant expressions from blissfully happy faces, and to judge by the expressions one sees, the concerts seem to answer a need, to be everything one could ever dream of, the very best way to get completely carried along by the Christmas spirit.

When things go this well, there is no earthly reason to break with tradition. For this tenth anniversary the participants have been absolutely rearing to go, and to do it all over again. And their mission to spread a message of peace is now certainly more current and more urgent than it ever was. So, welcome “Christmas With My Friends V.”

“It is quite amazing,” says Landgren, “what buried treasures there are that can still be brought to the surface, “and for this fifth album we have definitely unearthed a few. For me it is always a joy to go out on search parties with my Christmas friends, they always come back with surprising songs - from medieval times right up to the present day.” Once again an instrumental and vocal powerhouse team has been assembled around Landgren and his trombone. First and foremost the four vocalists: Jeanette Köhn, Jessica Pilnäs, Sharon Dyall and Ida Sand, who is also on piano duty. There’s Jonas Knutsson on saxophone, Johan Norberg on guitar and Eva Kruse on bass who make up the experienced unit to back the singers. Their work together in Landgren’s group over the years has led to the point where they have now created something of a Christmas signature sound.

Each of the eight musicians was asked to put forward two pieces for possible inclusion, and thereafter the construction of the programme was a joint effort. The end-result of that process was a comprehensive, unbeatable 18-part kaleidoscope of Christmas sounds. It starts with a trombone choir playing Bach – in reality the multitracked solo sound of Nils Landgren. We move on to Christmas songs in Swedish (“Härlig Aer Jorden”), in German (“Oh Heiland, reiß die Himmel auf”/ Oh Saviour, tear the sky) and American Christmas carols (“Sleigh Ride”) followed by some original compositions to soul-humdingers such as Gary Hines “Love Is Born.” We then move on to a comedy treatment of the old Swing standard “Baby, It's Cold Outside” which is the opportunity for some stunning vocal duetting from Landgren and Pilnäs.

When all is said and done, it is once again the wealth of great voices on show that turns this album into a Christmas sleigh ride traversing all kinds of different landscapes: Jeanette Köhn has real authority with her classical singing, Sharon Dyall brings a wicked hot come-hither bluesiness, Jessica Pilnäs has an irresistibly soulful jazz timbre, and Ida Sand gets right into the gospel groove. Equally compelling is the creativity of the musical interpretations, which nonetheless leaves the essential character of every one of the songs completely intact. A footman seems to be beckoning you into an eighteenth century coach for the “Hosianna” by the musical world traveller Georg Joseph Vogler – it has an almost Caribbean feel; “Joy To The World” is even older but it is a smooth cruise through the gears of jazz changes, while Johan Norbergs “Kokles Christmas” seems to connect the listener to some kind of psychic mystery. Sometimes it is endless snowy landscapes and winter Carl Larsson scenes which unfurl before the mind’s eye, sometimes it is the gaudy colours of streets bustling with Christmas shoppers. At other moments the sorrow and the drama of the Christmas story touch the heart, sometimes one can feel oneself transported by the pure sound of hope, or of salvation and deliverance. God Jul, as they say in Sweden, and a very Merry Christmas!
Top
Post Reply
1 post • Page 1 of 1