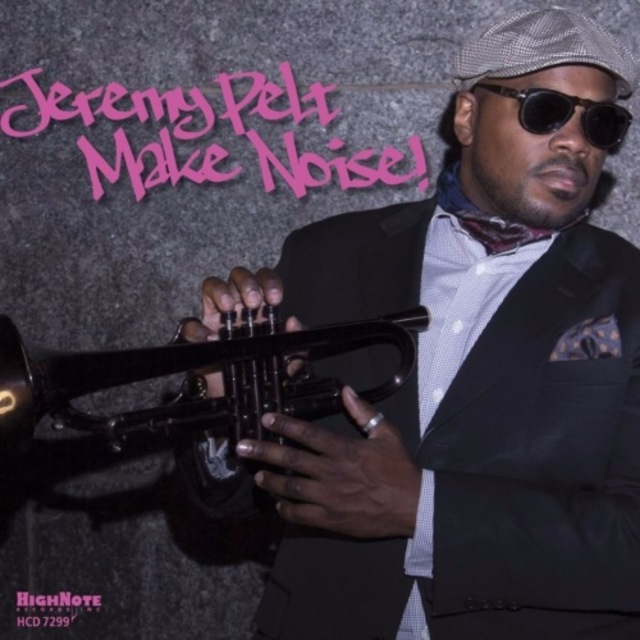 Trumpeter Jeremy Pelt occupies an enviably open-minded space in the modern jazz landscape. A capable traditionalist, Pelt has built his career around making acoustic post-bop, with increasing forays into electrified, electronic-tinged fusion. His mutable choices keep you in suspense as a listener -- you’re never sure what to expect from one album to the next. While there are no such electronic flourishes on Pelt's 2017 effort, the warmly sophisticated Make Noise!, it still pops with much of the same cross-genre creativity he's explored in the past. The album follows his similarly inclined 2016 effort #Jiveculture, which also featured an inventive acoustic sound accented by legendary bassist Ron Carter. This time out, Pelt brings along a slightly less-high-profile, if no less talented, ensemble including pianist Victor Gould, bassist Vicente Archer, drummer Jonathan Barber, and percussionist Jacquelene Acevedo. Together, they take an intimate approach to expansive post-bop that straddles the line between Miles Davis' '60s albums and Terence Blanchard's early-'80s work. Pelt has a broad, enveloping trumpet tone and a knack for laying down highly engaging solos that never hold a listener at arm's length. It's a skill he puts to good use throughout Make Noise! and one complemented by his bandmates, especially pianist Gould, who layers these tracks with a sparkling delicacy reminiscent of the late Mulgrew Miller. Similarly, with Acevedo's kinetic percussion filtered throughout, Make Noise! also has a strong Afro-Latin influence, a vibe especially apparent on the roiling title track and frenetic, salsa-infused "Bodega Social." Equally compelling, "Chateau d'Eau" has a languid, R&B-inflected melody set to a midtempo Afro-Latin groove. Elsewhere, Pelt pushes toward harmonically nuanced modalism, offering a fittingly elegiac and noir-ish tribute to the departed pop icon on "Prince," and evincing the angular, classically influenced style of Black Codes-era Wynton Marsalis on "Cry Freedom." While much of Pelt's work fits nicely into the jazz canon, he clearly has an open ear for melody, a gift he exercises on "Your First Touch...", which sounds like a Leonard Cohen song reworked as a sensuous jazz ballad. Ultimately, Make Noise! continues to reveal Pelt's maturation into a confident artist, comfortable enough with his place in the jazz tradition to keep subtly pushing the edges of audience expectation.
Matt Collar
Top
Post Reply
1 post • Page 1 of 1