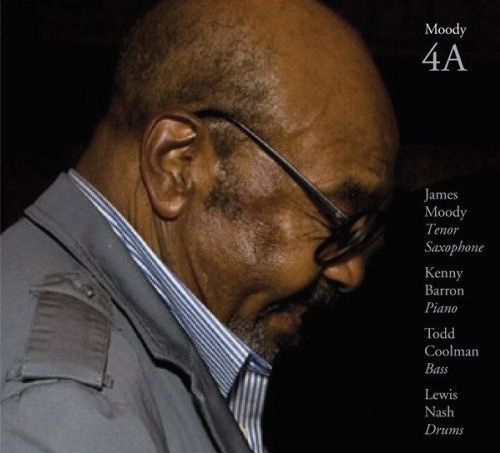 In the late '40s, saxophonist/flutist James Moody staked his claim on the jazz landscape when he gained prominence as one of the key ingredients of Dizzy Gillespie's orchestra. Nearly six decades later, at the age of 84, Moody shows no signs of slowing down. He's in excellent form on his latest release 4A.

On 4A, Moody stretches out on eight standards, getting solid support from Kenny Barron (piano), Todd Coolman (bass) and Lewis Nash (drums). "Secret Love" opens the disc with a martial drum march before segueing into a laid-back, mid-tempo groove. Everybody shines on Barron's "Voyages," as close to 'modal' as they get on the set. Two ballads represent the highlights of the disc: "'Round Midnight" and "East of the Sun." Moody and Barron – collaborators from decades back – sync up to create an atmosphere ranging from heartbreaking to romantic. A few more mid-to-up-tempo numbers round out the set, notably "Bye Bye Blackbird" and Benny Golson's "Stablemates."

Moody and Coolman, along with pianist Renee Rosnes and drummer Adam Nussbaum, set up shop at New York's Iridium for a four-night run early in August, 2009. A late Friday night set kicked off with "Have You Met Miss Jones," Moody playing with a level of intensity unexpected from an 84-year-old. Nor would one expect such razor-sharp wit; he told two jokes during the set: the first a racially-tinged joke about an African zebra and then a lighthearted jab at Catholicism.

Along with Moody's comedy cavalcade, he also brought out the flute for a noir-ish exercise in some back-alley blues. The entertainment continued when Moody seemingly began a scat-driven performance of his famous "Moody's Mood for Love." However, after some humorous vocal noodling, Moody segued into a version of "Pennies From Heaven," but with the lyrics drastically changed, altering the theme to "Benny's From Heaven." The group closed with its theme: an abbreviated version of Sonny Rollins' "St. Thomas."
Graham L. Flanagan
Top
Post Reply
1 post • Page 1 of 1