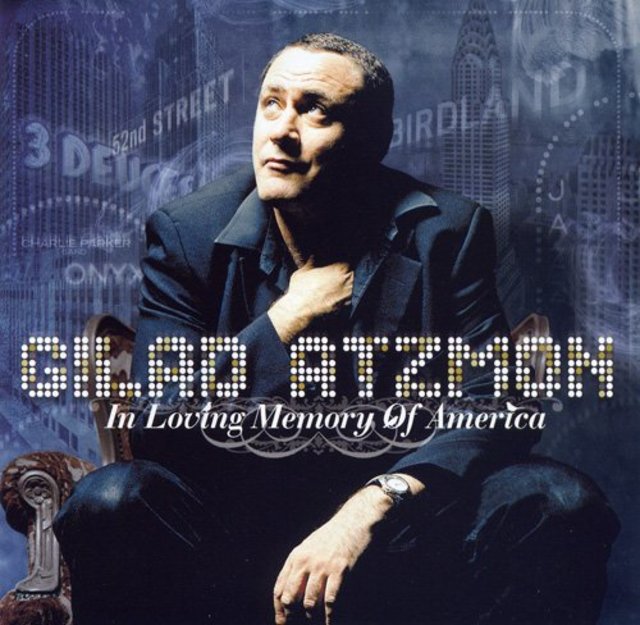 This is an outstanding album. Reed man Gilad Atzmon has taken five standards, re-interpreting the versions recorded with strings by Charlie Parker, added six of his own compositions, and created an original, supremely enjoyable and affecting piece of work.

The album's title refers to an imagined land—the country that Atzmon envisaged when, as a 17 year-old in Israel, he first heard Charlie Parker playing "April in Paris" and fell in love with jazz and America. According to his liner notes, this is not the America that Atzmon sees today, where jazz is no longer a revolutionary music, but it is still the home of his "priests" and "heroes." In Loving Memory of America is a fitting tribute to those artists.

This is not an album that slavishly copies the sound of Parker with an orchestra. That sound is an inspiration for the album, and Atzmon's arrangements of the standards bear a clear resemblance to the originals, but there is no attempt to play solos note for note, to recreate the sound of the '50s orchestra or to ignore the 60 years that have passed since the first of Parker's recordings. Indeed, two of Atzmon's own compositions—"In Loving Memory of America" and "Refuge," a reworking of "My Refuge" from Refuge (Enja, 2007)—show some of the composer's contemporary influences, and stand in marked contrast to the rest of the album, the former layering free-form sax, scat singing, street sounds and Fender Rhodes over a heavy percussive beat.

Instead of using a full string section Atzmon collaborates here with the Sigamos String Quartet. The result is a more open, pared-down, sound which gives the jazz musicians space while still managing to create a rich and full sound on tracks including "musiK."

The album's rhythm section adapts beautifully to everything Atzmon's arrangements ask of them. This is particularly true of "What is This Thing Called Love". Drummer Asaf Sirkis' restrained funk and bassist Yaron Stavi underpin Frank Harrison's Fender Rhodes, Atzmon's sax and a beautiful, flowing performance by the strings to create perhaps the finest track on the album. By contrast, "Call Me Stupid, Ungrateful, Vicious and Insatiable," an Atzmon composition which also appears as a song on singer Sarah Gillespie's Stalking Juliet (EGEA, 2009), rests the rhythm section in favor of emotive interplay between Atzmon's clarinet and the Sigamos Quartet. "Tu Tu Tango" references "Everything Happens to Me" and creates images of Leonard Bernstein's West Side Story, before and after its tango rhythms take centre stage.

This is an imaginative, emotionally engaging tribute to Atzmon's earliest jazz influences, featuring some extremely skillful and stylish playing—a class act from everyone involved.
by Bruce Lindsay
Top
Post Reply
1 post • Page 1 of 1