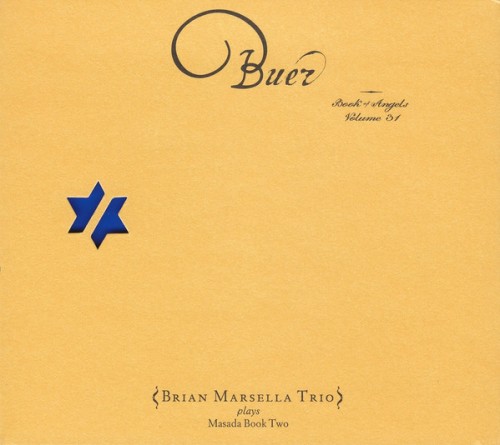 How many angels are there? Alto saxophonist/composer John Zorn started his Masada Book Two, Book of Angels endeavor in 2005, with Astaroth: Book of Angels, Volume 1, by the Jamie Saft Trio. Thirty recordings and twelve years later, he offers up Buer: Book Of Angels, Volume 31, by the Brian Marsella Trio. A tune for every angel. That's a lot of angels.

The always adventurous and prolific Zorn, who reportedly wrote three hundred songs for his Book of Angels project in in three months in 2004, has a goal: that of bringing Jewish music into the twenty-first century, in hopes of seeding an evolution similar to the one that jazz experienced, from—using one example—Louie Armstrong to Miles Davis to Dave Douglas. More than anyone, he is keeping the form vibrant and dynamic.

Numerous artists and ensembles have contributed to the series, but the piano efforts in the Book Of Angels are particularly compelling, from Jamie Saft to Uri Caine to Craig Taborn, and now Brian Marsella—top level pianists immersed, solo or trio, in Zorn's musical world.

There's something about the pared-down aspect that seems to crystallize Zorn's vision. Marsella's Buer opens with "Jekusiel," a percussive piano riding a full-blown runaway train momentum. Jewish music, of the up-tempo variety, has a wonderful exuberance. "Diniel" is a pensive, dark-hued ballad, with Marsella leaving the powerhouse approach of the opener for a light touch and melodic delicacy, with bassist Trevor Dunnand drummer Kenny Wollensen—both prolific contributors to John Zron's Tzadik Records outings—weaving a nuanced backdrop. "Palalael" glows majestically; "Parymel" flies as free as a Cecil Taylor tune; "Bazazath" is a slinky, wee hour rumination.

Rumors about a wrap-up of Zorn's "Book Of Angel," Masada Book Two have roamed around. A Book Three is reportedly in the works. If Buer is the last of Book Two, it serves as a terrific wrap-up to John Zorn's decade-plus effort.
By DAN MCCLENAGHAN
Top
Post Reply
1 post • Page 1 of 1