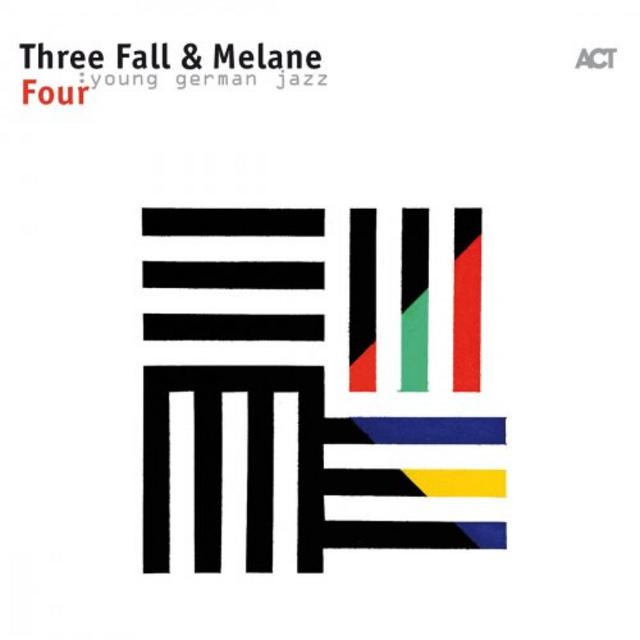 With the arrival of vocalist Melane Nkounkolo, Three Fall have grown to four, and opened up new worlds of sound. When they were a trio, their blend of jazz, funk and hip-hop already gave them considerable stylistic range and variety, but in this album, Four, their armoury of possibilities has been expanded and enriched with new elements: soul, reggae and Afrobeat. Three Fall had been a trio ever since their formation in 2008. Their unusual instrumentation, drums plus two blowing instruments – i.e. not following the convention of having either a bass or a harmony instrument – proved rapidly successful. Their 2011 ACT debut “On a Walkabout” had new instrumental versions of tunes by the Red Hot Chili Peppers, which the Peppers’ drummer Chad Smith has described as the best cover versions he has ever heard. It has now been four years since the release of the subsequent Three Fall album “Realize”. The lads have been travelling the world – just in the year of 2016 they performed in Egypt, Qatar, Japan and South Korea. And then they met Melane….“Ever since we worked with hiphop artist Promoe on one of the tracks on “On a Walkabout”, we had the idea of performing with a singer”, explains trombonist Til Schneider. “When happened to see Melane at a festival, I was blown away immediately. She can sing, dance and rap. Plus she has unbelievable charisma.”

Melane Nkounkolo was born in Germany in 1986. Her parents had moved there from the Congo. Her childhood was shaped by Congolese music, notably the “King of rumba rock” Papa Wemba. “It was only later that I came into contact with other types of music”, says Melane. “So what I could do was to develop my own style, and one which can’t be pinned down or categorized.”

“Four” is also the fourth album by Three Fall. The singer’s velvety and limpid voice stands in contrast with the deliberately rough edges of the band. The forceful sound of the trio – its members alongside Schneider are drummer Sebastian Winne and saxophonist Lutz Streun – persists, but now there is also room for something much more gentle and soft.

After a short intro, the album explodes into life with the funk-crossover track “Medium Rare”. This is the kind of number with which Three Fall & Melane could get any crowd rock festival swaying along to – and even without using an electric guitar. The tuneful “Tata Na Lola” has a line from Bob Marley’s “Three Little Birds“ dropped in at the end, sung in Melane’s natve language Lingala. The title of the track means “Father in Heaven”, and in this song Melane deals with the subject of her late father. “What this is about”, she says, “is that our life her on earth isn’t the end. Some day we are going to see each other again. The song was a source of strength for me, because I believe that our loved ones only cease to exist when we stop talking about them, thinking about them…and singing about them.”

In “Elevation of Love” the band has covered a classic song of the Esbjörn Svensson Trio. Three Fall’s version of this brings out the group’s powerfully lyrical side. “Thank You” is a laid-back soul number propelled by its R&B feel, while “Silver & Gold”, infused with reggae and dub, opens up some very differet facets of the quartet. And then there is the most remarkable track on the album: Three Fall & Melane have transformed Ace of Base’s pop hit “All That She Wants” from 1992 into an out-of-this world Afro-soul spectacular. The mood shifts in the chorus, when foot-tapping reggae grooves send the song in the direction of the dance floor. It’s an unforgettable version which is bound to lift spirits at many a late summer party.

On “People” things get more political. Melane takes a stance on the refugee issue, reflections which are conditioned by her personal experience: her brother had to flee during the civil war, but was also deported from Germany. “It is a symbolic song which represents the fates of many people. Nobody leaves their home country voluntarily, and I know many people to whom similar things happened. Writing songs is always also a safety valve, a means by which I can talk about issues such as racism which are everywhere in society.”
Top
Post Reply
1 post • Page 1 of 1