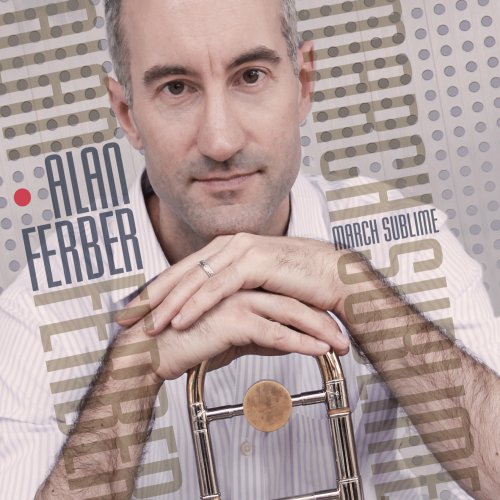 When you open a nice bottle of red wine, to get the best results, it is better to set the bottle aside for some time. You let the wine, as they say, "breathe," allowing oxygen to bring out the hidden flavors. Same for a big band recording like Alan Ferber's March Sublime. Instead of setting the disc aside, you might check with your neighbors (or close your windows) and turn up the volume. At higher amplification, the subtleties and nuances of the trombonist's arrangements are revealed.

Ferber, a veteran of the Vanguard Jazz Orchestra and John Hollenbeck's large ensemble, cut his teeth playing in the big bands of Gerald Wilson, Les Brown and Brian Setzer. His previous release, Chamber Songs: Music for Nonet and Strings (Sunnyside, 2010) proved that he can write more intricate music. Here he displays the same conviction, but with a large jazz ensemble.

The eight tracks, five penned by the leader, elegantly capture the 17- piece band and Ferber's arrangements. The disc opens with the up-tempo and rhythmically elaborate "Kopi Luwak," a song named after an Indonesian coffee bean that is harvested only after it has been pooped-out, undigested, by monkeys. While the java might be crap, the music is a caffeinated crossroad of modern composition and Eastern European music. Saxophonist John O'Gallagher takes a smashingly funky solo over the disciplined big band's intricate playing.

Ferber reaches across eras here. He can go old school, delivering a hauntingly beautiful rendition of Hoagy Carmichael's "I Get Along Without You Very Well," with all the traditional dressings of a large ensemble circa Red Norvo's Orchestra 1939, with trumpeter Scott Wendholt and pianist David Cook taking tastefully reserved solos. He can also take up an electronically modified trombone to solo on the title track. While not beholden to one sound, Ferber keeps his concepts consistent. His cover of Björk's "Hyper-Ballad" features an ever-changing arrangement, sifting the charts and foundation of the piece, while sprinkling it with some electric keyboards, clapping and time changes.

The masterpiece here is the two tracks "Wildwood Intro" and "Wildwood." Ferber presents a lazy, streaming blues, gorged on his and guitarist Anthony Wilson and solos. The big band offers up a trombone chorus, some big, sweeping vistas and full- bodied flavor. Waiter, another glass please.
Review by Mark Corroto
Top
Post Reply
1 post • Page 1 of 1