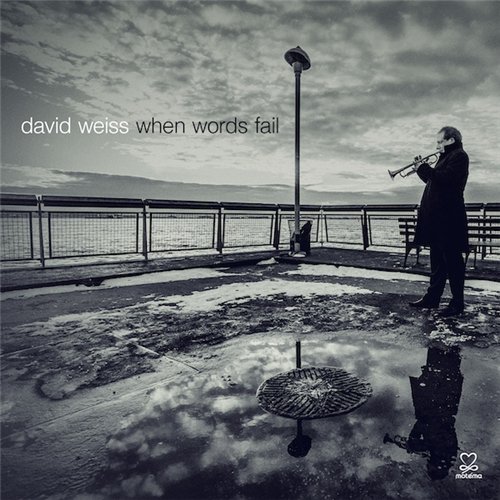 "Where words fail, music speaks." Jana Herzen, head of Motema Music, shared this Hans Christian Anderson quote with David Weiss after the trumpeter had already titled his new record; the sentiment of that statement just happens to perfectly connect with this album.

In 2013, loss seemed to hover around Weiss, his friends, and the jazz community at large. So, when faced with the cruel realities of life and death, Weiss did what any artist of great character and strength would do: he let his music speak his feelings. When Words Fail is a tribute album, but better not to call it that, for it doesn't look to eulogize a single individual, paint pictures of sadness, or dwell on a particular state of mind. Instead, it comes off as cathartic art, celebrating musical brotherhood and life in general.

Over the years, Weiss has earned much critical praise and respect for his ambitious and wide-ranging work with The New Jazz Composers Octet, his support and championing of trumpeter Freddie Hubbard during that icon's last years, explorations with his Point Of Departure band, burn-and-drive work with The Cookers, and reworkings of saxophonist/composer Wayne Shorter's music. In those situations, Weiss wore many hats, serving as composer, arranger, leader, supporter, and situation-maker. Here, he does the same, but he also serves as the emotional power source for this music. When Words Fail may be the most direct and personal record Weiss has ever released.

The album opens with Weiss' tribute to Hubbard—"The Intrepid Hub." Right away, Weiss makes it clear that this is more about joy than sadness, as Hubbard's aggressive, hard-driving qualities come through in the music. The title track is dedicated to bassist Dwayne Burno, who passed away shortly after recording this album. His jaunty bass sets the song in motion. Other album high points include the inquisitive and probing "Loss," a nod to Herzen, who lost her father in 2013, and "Passage Into Eternity," dedicated to saxophonist Jimmy Greene and his family, who lost Ana Grace Marquez-Greene in the horrific and senseless Sandy Hook massacre. Rather than focus on the sadness surrounding this event, Weiss seems to focus on reflection, the honoring of life, and looking toward what comes after.

Life and loss are inextricably linked, but that doesn't make it any easier to accept. When Words Fail, without obsessing on gloom or focusing solely on silver linings, takes an honest look at that fact.
Review by Dan Bilawsky
Top
Post Reply
1 post • Page 1 of 1