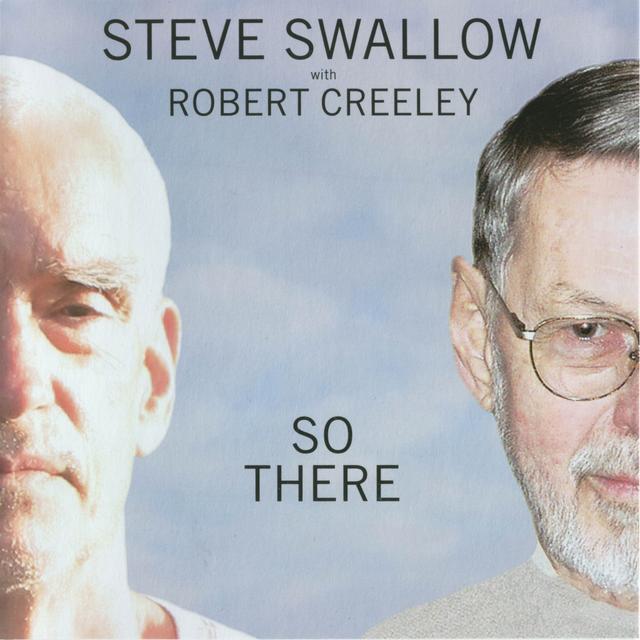 Bassist Steve Swallow has been meditating on the poetry of the late Robert Creeley (1926-2005) for a long time. In 1980, Swallow and pianist Steve Kuhn released an album of song settings of Creeley's poems with vocalist Sheila Jordan (Home, ECM). After a quarter century, Swallow feels prepared to take up the collaboration again.

For So There, Creeley recorded a selection of poems and fragments. Swallow took the recordings to Oslo a few short months after the poet's death and created the musical accompaniment, again in the company of Kuhn, and this time also with the Cikada String Quartet.

The amount of playing time featuring Creeley actually speaking is quite small, for two reasons. The first emerges directly from the poetry itself. Creeley's verse, at least on the evidence of the work featured here, is spare and short; not short in the manner of Ezra Pound (who was seeking a macho, Hemingway-like terseness), but short in a Zen-like, highly-concentrated way.

But while Creeley's contributions don't take up much time, Swallow discovers vast musical material encoded within them. Creeley's idiosyncratic reading helps this process of discovery. His interventions are especially mannered toward the beginning and the end of the disc, his sense of emphasis and caesurae strange and unexpected—a spoken- word analogue to syncopation in jazz improvisation, surely.

Toward the middle, though, Creeley's poetry and delivery become more natural, based on what poet Josephine Miles famously praised as "the spare and active interplay of talk," as in her well-known poem "Reason": "Said, Pull her up a bit will you, Mac, I want to unload there./ Said, Pull her up my rear end, first come first served." Creeley's "Riddle," surrounded by Kuhn's bluesy piano, is aggressive in the same vein: "Who the hell you think you are / Come in here, push me around?"

Swallow and Kuhn accompany these readings in much the same way that Marcus Miller built harmonies and arrangements around trumpeter Miles Davis' previously recorded solos on Davis' Tutu (Warner Bros., 1986), a procedure repeated by producer Easy Mo-Bee with synthesized vibes on "High Speed Chase" on Davis' Doo- Bop (Warner Bros., 1991). It worked well for Davis, and it works, if anything, better still for Swallow and Creeley.

The effect of accenting Creeley's words with bursts of piano chords is especially jarring on several cuts, as on "Names" and "Here Again." The element of surprise lies in the way those accents exhibit a musical rhythm. Examples abound, some more subtle than others, such as the way Kuhn's piano line on "Miles" echoes Creeley's diction when he says "sim/ple/ trips."

It is not just a matter of fitting the accompaniment around the poet's words; Swallow needs a little time to work out, lovingly, the musical ideas he has detected in the poetry. And this is the second reason why the poetry-reading-to-music ratio is lower than you might at first expect.

Much of the songwriting recalls Swallow's recently released series of duets with pianist Deidre Rodman, Twin Falls (Sunnyside, 2006), a winning combination of the elegiac and the bluesy. This musical mood is substantially enhanced by the well- crafted string quartet parts. Swallow has said that the poetry led him, terrified, to "acres and acres" of Haydn, Shostakovich, Beethoven—"I Know a Man" evinces the clear imprint of Bartók. The record is not just jazz "with strings": the Cikada players deploy vibrato, glissando and all of the other timbral effects with which the ensemble is endowed.

Part of the elegiac mood, of course, comes from our knowledge that Creeley died in the middle of this project. The poet takes his leave of us near the end of "Sufi Sam Christian." In as effective an endorsement for his declamatory approach as could be imagined, over shimmering strings, Creeley's weathered voice, with its halting phrasing, intones, "Lift me into heaven slowly / 'cause my back's sore / and my mind's too thoughtful / and I'm not even sure I want to go ..." It sounds like an ending, but it is not; Swallow puts the number squarely in the middle of the record. Certainly this decision about track sequencing is deliberate. Creeley is back in the next cut, telling us he "persists in wanting."

Poets look askance (as did Shelley all that time ago in "Ozymandias") at claims regarding the permanence of human creation. Perhaps; but on this record, Robert Creeley is still speaking, and thanks to Swallow's musical contribution, we can hear him a little better than we otherwise might.
By JEFF DAYTON-JOHNSON
Top
Post Reply
1 post • Page 1 of 1