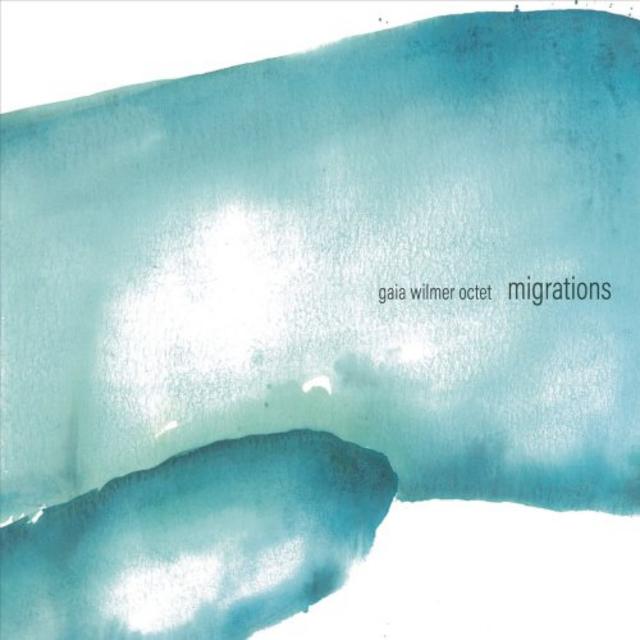 Migrations, introduces the music of Brazilian composer and saxophonist Gaia Wilmer, an emerging voice in the contemporary jazz community. Drawing inspiration from Brazilian music, its harmonies, rhythms and melodies, and from contemporary jazz, Gaia creates a unique and colorful world of music that is both cerebral and emotional. Her music draws inspiration from composers such as Hermeto Pascoal, Guillermo Klein, Kenny Wheeler, Vijay Iyer and Maria Schneider, and the pieces generate their shapes and feelings from the idea of home; the strong relationship with Brazilian and Latin American cultures and with contemporary jazz and the relationship between people.

The opener, “After Them," was the first piece written for this octet. It was written between Gaia attending concerts and master classes by Vijay Iyer, Maria Schneider and Geri Allen, and draws its inspiration from those experiences. It begins alternating between one main bass line and a rhythmic idea in the piano inspired by Iyer’s music. The shapes and textures of the lines, both in the bass and in the top melodies come from impressions of Schneider’s melodies and orchestrations. The melody evolves into a flute solo by Yulia Musayelyan that leads back to the opening bass line, and the return of the main melody.

“Criançada" started as an exercise playing with constant structures and developed in to an energetic tune with a joyful melody that plays with the relationships between 3/4, 6/8 and 6/4 and the different ways of feeling those meters. The title of the tune means, “a bunch of kids”. The solo section follows the same idea with Leandro Pellegrino on guitar and Gustavo D’Amico on tenor saxophone interacting with each other.

The title piece, “Migrations," was written after a Guillermo Klein concert in Boston and features Raphael Lehnen on bombo legüero and Song Yi Jeon on voice. Written specifically for these artists and inspired by Klein’s music, this piece was the first one written after the group was settled, and serves as a tribute to the great animal migrations around the globe. Centered around the interval of a third, the piece starts with an acappella introduction, developing this intervallic motif. The composition was also inspired by the Kenny Wheeler album, Music for Large and Small Ensembles.

“Helen" came from the idea of exploring modes found in scales other than the common major. The ostinato, the chords and the melody are based on the mixolydian b6 mode from the melodic minor scale. It is the only composition on the album (with the exception of Hermeto Pascoal’s “Acuri”) that was written for a smaller ensemble and not specifically for the octet. It is dedicated to Helen de la Rosa, the drummer who first played the tune.

“Chá" is a ballad written for love and friendship, and explores free improvisation between the wind players. It starts with a free duet with Gustavo D’Amico on soprano saxophone and Gaia on alto that leads to the main theme. It also features solos by Mayo Pamplona on bass and Vitor Gonçalves on accordion.

The harmonic ideas of the energetic “No Talking" came from the constant structure and geometric atmosphere of “Giant Steps”. In the first section, the main motif is transposed and developed in myriad harmonic ways, while separated by a minor third. The second section presents a contrasting idea that is also transposed and developed but this time by major thirds. Soloists include Gaia and Song Yi Jeon on voice.

“Nostalgias" is a melancholic, through-composed ballad based on the intervals of a second and a sixth. It has a four-part structure where the C section is a variation of the A section and the D section is a variation on the B section. The whole form repeats twice with Leandro Pellegrino soloing on guitar over the second A and B and Gaia Wilmer embellishing the C.

Hermeto Pascoal’s “Acuri" was recorded by his group in 1989 on his first Mundo Verde Esperança, an album that was never released. The piece was recorded by Pascoal’s new group on his most recent album and pays homage to Chick Corea with a new title, “Um Abraço Chick Corea”. This version, recorded by Gaia’s octet, gets a creative treatment with a exciting and virtuosic flute/piccolo line, played by Yulia Musayelyan, as well as some harmonized lines with the saxophones and new counter melodies played by Leandro Pellegrino on guitar and Gustavo D’Amico on tenor saxophone. The second exposition, a samba in 7/4, with Song Yi Jeon playing the melody along with Pellegrino while the winds float in and around, followed by D’Amico’s solo in a faster samba in 7/8. Gustavo’s solo is followed by Gonçalves’ solo in 3/4 that leads back to the introduction and the head out.

Migrations is an exciting introduction to the music of Gaia Wilmer. The group performs the program with verve and virtuosity. This recording is certain to create fans of the fertile musical mind of Gaia Wilmer.
Review by Jason Byrne
Top
Post Reply
1 post • Page 1 of 1