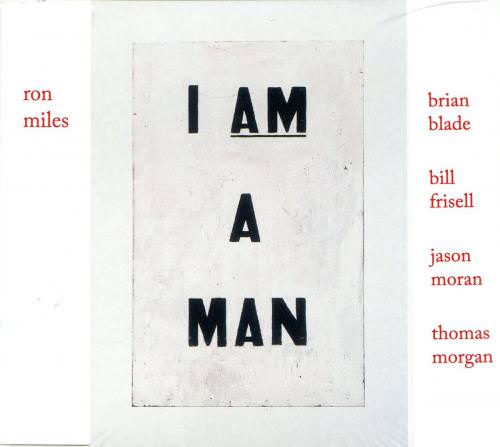 When two workers were killed by a malfunctioning garbage truck in Memphis in 1968, the flames of activism were rightly stoked. Sanitation workers fed up with poor working conditions and abuse of power poured into the streets wielding "I Am A Man" signs, making a principled stand that spoke not only to the situation at hand, but also to a broader struggle connected to the civil rights movement. That incident remains clearly fixed in cornetist Ron Miles' mind, standing out both for its place in history and for what the statement on those signs represents.

In addressing the very notion of the "I Am A Man" platform, Miles references the sadly apparent nexus between injustices of the past and our present day situation, bringing social justice into his artistic sphere while also investigating the more philosophical notions connected to humans simply being and expressing themselves. There's no dichotomizing these topics for Miles—"it's impossible and unnecessary to separate spirituality and politics, and art and politics," he shares in Michelle Mercer's finely crafted liner notes—and this album is all the better for it.

The quintet that Miles assembled for I Am A Man capitalizes on long-lasting relationships and familiar figures. First and foremost on the list of old friends is Bill Frisell. The shared sensibilities that bind the cornetist and guitarist have been on display for more than two decades, highlighted on Frisell releases like the eerily wonderful Quartet (Nonesuch, 1996), the richly textured Blues Dream (Nonesuch, 2001), and the stylistically broad-minded History, Mystery (Nonesuch, 2008); collective concoctions, such as the two albums from Floratone; and a number of Miles dates, like the duo-licious Heaven (Sterling Circle, 2002) and the trio-centric Quiver (Enja/Yellowbird, 2012) and Circuit Rider (Enja/Yellowbird, 2014). Drummer Brian Blade, the third member of the trio on those aforementioned Miles albums, also returns for another ride here, bringing his inimitable touch and signature blend of grace and groove to the fore.

While Miles' past trio dates never wanted for anything or anyone, the two additives on this outing—bassist Thomas Morgan and pianist Jason Moran—prove indispensable, manifesting as the missing ingredients that nobody could've known were missing in the past. Morgan, who's Frisell's bassist of choice these days, is a highly skilled harmonic navigator and a rhythmic pillar, capably binding this band and craftily finding his way through solid checkpoints and the mists of uncertainty that occasionally create a fog. Moran, whose distinctive personality could theoretically threaten to overpower any situation, perfectly meshes with his band mates. At times he artfully weaves his keys into the tapestry, but he's equally comfortable standing out front to paint a pensive picture as an entryway ("Darken My Door") or add his two cents in a quaint and beautiful setting ("Mother Juggler").

The originals presented here are basically in keeping with the general theme and Miles' established persona. His cornet, with its sapphire-to-indigo blue streaks, provides a high level of warmth that draws in the ears, and his compositions inspire conversation, communication, and the occasional feeling of consternation (i.e. the core of "Revolutionary Congregation"). One number might be set off by a simple motif, inviting a lyrical strain to set in and a grooving gathering to take shape ("I Am A Man"); another might flow from the start, with an underlying swing pulse setting a curved course for cool ("The Gift That Keeps On Giving"); and a third may call on deep reflection ("Is There Room In Your Heart For A Man Like Me?").

There's great specificity in Miles' writing, yet the music is flexible enough to allow for these five beautiful and intrepid souls to make their mark within the established bounds. I Am A Man occupies a rare space, existing as a mark of musical pride and dignity, a statement driven by social activism, a history-propelled piece of art, and an album that challenges and unites. What's more, it scores incredibly high marks when viewed from each of those angles.
By DAN BILAWSKY
Top
Post Reply
1 post • Page 1 of 1