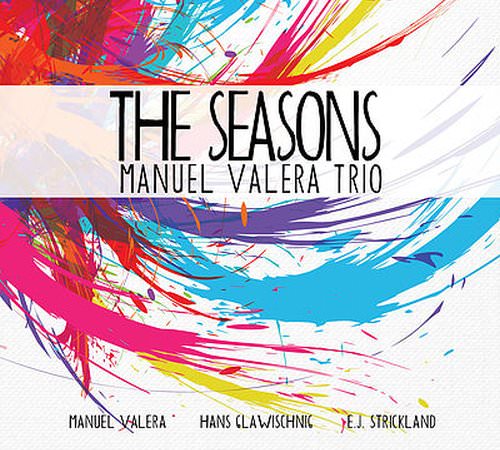 Although Manuel Valera originally staked his claim to fame as a "Latin jazz" pianist, it's fair to say that he has sought to transcend the constraints imposed by that label. On this release, the second by his trio with bassist Hans Glawischnig and drummer E.J. Strickland, Valera displays just as much interest in drawing from the musical worlds of classical and pop, refracted through the general prism of post-bop, as anything immediately identifiable as "Latin" jazz. With a well-developed group sound honed during four years of partnership, Valera's trio ultimately moves beyond category altogether.

The album's title comes from a four-part suite Valera composed with inspiration from Antonio Vivaldi's Four Seasons. Rather than slavish imitation, Valera uses Vivaldi's concept more than his musical themes, as one is hard-pressed to hear any overt references to the original concertos. Instead, Valera uses the notion of the cyclical passage of time as a springboard for his own rich compositions—especially effectively in the fourth movement, "Winter," with the tune's poignant melody introduced by Glawischnig and accompanied with subtle Latin inflections on the toms by Strickland. Yes, there are Latin stylistic elements present throughout the record, but they're usually understated. Indeed, the album's most "Latin" composition, Cuban songwriter Osvaldo Farres's "Tres Palabras," receives Valera's most classically-inspired performance, with gentle arpeggios and delicate pianistic flourishes that emphasize the lyrical dimensions of the song rather than its rhythmic aspects.

Of the trio's many strengths, perhaps its most distinctive is its percussive power, noticeable especially on the up-tempo numbers. Strickland is crucial in this regard, as his seemingly inexhaustible energy fuels burners like "Opening" and the band's charged version of Cole Porter's "What Is This Thing Called Love?" Valera's own technique relies heavily on his forceful left hand, with the intensity of his chords and ostinatos serving as a foundation for his impressive right-hand flights. On the less rambunctious tracks, like Lennon & McCartney's "In My Life" and Leonard Cohen's "Hallelujah," Valera's melodic sensibility shines and the band shows that it can offer beauty and strength in equal measure.

With well-chosen material expertly performed, this is a recording destined to help Valera shed the "Latin jazz" tag. Instead, let's be content to call him what he is: an abundantly talented and imaginative pianist. And leave it at that.
Review by Troy Dostert
Top
Post Reply
1 post • Page 1 of 1