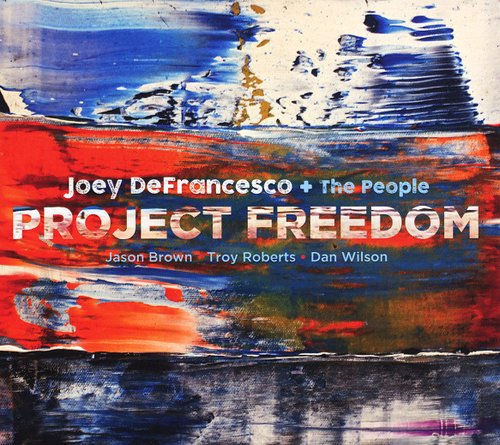 Can jazz, historically a music of freedom, still serve as a salve in troubling times? Joey DeFrancesco, through intent, song selection and the typically effervescent sound of his B-3 organ, strives to offer musical/spiritual encouragement with Project Freedom, the debut release from his new unit. DeFrancesco, guitarist Dan Wilson, drummer Jason Brown and saxophonist Troy Roberts largely succeed on that count, on an album that mixes barnburners with stirring, soulful material.

Falling squarely in the latter category are two pieces associated with the civil-rights movement. “Lift Every Voice and Sing” benefits from one of DeFrancesco’s most expressive improvisations and a thorny, effects-enhanced tenor workout, while Sam Cooke’s “A Change Is Gonna Come” shifts from a rubato, churchy, tenor-led statement of the melody to old-school R&B, gradually ratcheting up the excitement. Here and throughout, the leader democratically shares the spotlight with his bandmates. In a similar vein are DeFrancesco’s “Project Freedom,” a multipart tune peaking with a speedy bop head, brisk trading of fours and simultaneous soloing; the floaty “Peace Bridge”; and the lilting “Karma.”

DeFrancesco opens with a quick snatch of “Imagine,” John Lennon’s plea for unity, on a program that also includes the laidback, jammy “The Unifier”; “One,” with the leader injecting his robust trumpet work into the mix; and the rousing closer, “Stand Up,” which begins and finishes with exuberant handclaps. Is its title a call for action?
Review by Philip Booth
Top
Post Reply
1 post • Page 1 of 1