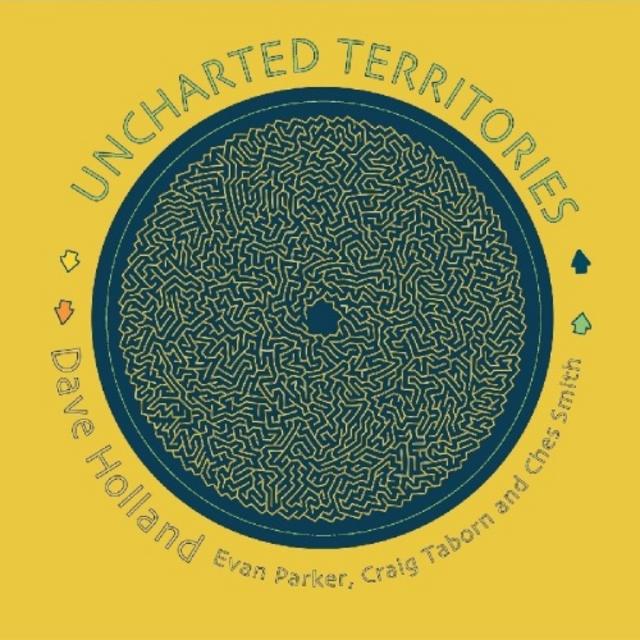 Some fifty years after moving to New York to make some historic music with Miles Davis, the great British bassist Dave Holland looks back on a career that has been present on many jazz touchstones too numerous to list here. So it’s perhaps inevitable that at some point Holland revisits turf that made up some of his legacy early on. 2013’s Prism could be seen as one instance of returning to some prior phase, as this rock-jazz record can be connected to Holland’s participation in Davis’ groundbreaking fusion recording of the late 60s.

The genesis for these new free improv sessions Uncharted Territories (May 11, 2018 by Dare2 Records) goes back even further, to Dave Holland’s pre-New York days and his association with UK sax giant Evan Parker. As fledgling unknowns, the two had played together in John Stevens’ Spontaneous Music Ensemble when SME made a landmark album in the history of British improvised music, Karyobin. Holland resumed going down the path of free jazz as soon as he left Miles’ band, joining Chick Corea, Barry Altschul and Anthony Braxton for the short-lived Circle ensemble, commencing a long association with avant-garde saxophonist Sam Rivers and of course, making a masterful debut as a leader titled Conference of the Birds with Rivers, Braxton and Altschul on hand.

A recent reconnect with Parker quickly led to a desire of the two to make totally improvised music together as a duo, but Dave Holland wanted to bring in the versatile keyboardist Craig Taborn from his Prism band into the mix and introduce even further intrigue by also adding Tim Berne and Mary Halvorson drummer Ches Smith (who had never previously worked with Holland nor Parker). And if that wasn’t enough to spike the punch, the quartet split off into every possible duo and trio combination in addition to the four-man unit for performances that are entirely spontaneous.

Not all of these nearly two dozen tracks are straight-up group improvisations, however. Ches Smith brought his “Thought On Earth” and “Unsteady As She Goes” to the sessions. He employs vibes for the first part of the former and with Parker sounding quite melodic, the album opener initially sounds not too unlike Holland’s small ensemble records of the aughts. But Smith abandons the vibes for his drums and that’s where things get a little randy. For the latter, Smith’s tympani rolls resemble thunder which — combined with Taborn’s tentative piano — signal an impending storm. What follows is sublime four-way spontaneity suddenly dispersed when the drummer once again becomes the vibraphonist. But the vibraphone is more than just a hobby for Smith, and he shows advanced chops on the instrument mixing it up with the other three for the only other pre-written composition, Holland’s “Q+A.”

The other quartet numbers reveal even greater four-way telepathy, since nothing was pre-planned. “QT12” begins timidly until Dave Holland throws it into gear and the other three quickly hop on his train, racing along together for some abstract bop. “QW2” commences as a tenor/piano-only encounter but Holland, again on arco, eases into the picture; Smith makes a more audacious entrance as things get choppy. Smith nimbly oscillates between his drum kit and his vibes on “QT13,” where Taborn resourcefully uses a Bluetooth speaker to alter the sound of his piano. Parker leads authoritatively on “QT5,” but everyone else finds their place in the song and avoids stepping into someone else’s zone. “QW1” once again finds Smith on vibes in a full group improv that ebbs and flows with the grace of classical music and the nimble revelation of jazz.

When thrown into other combinations of interactions, these musicians adjust accordingly so well, and it’s often here where you can understand why they’re considered elite. Sometimes, it’s by doing the unexpected: Parker sits out “Piano – Bass – Percussion T1,” where the remaining three ke out uncommon timbres from their respective instruments, capped off by portentous Taborn’s electronic drone. Smith again mans the vibes, this time for his duet with Parker (“Tenor Percussion W2”), and he manages to make it sound close to a saxophone sound. Dave Holland chose to bow his bass for his one-on-one with Parker (“Tenor – Bass W3”), and Parker’s drawn out notes seem to seek mimicking Holland. And “Organ – Vibes W1” pits Taborn against Smith in this diffused performance. Taborn’s organ playing is very offbeat, as is the electronically enhanced sonority out of Smith’s vibes.

Other times, there’s an uncanny sense of collective feel guided by a common spirit, like the Smith-less “Tenor – Piano – Bass T2” where the remaining three seem to float in unison without any apparent timekeeping. “Tenor – Piano – Percussion T1” is just missing Holland, but Taborn’s left hand largely makes up for it and his flowing, dark-hued chords sets the tone for the other two. Some stellar playing by Holland, Parker and Smith is happening on “Tenor – Bass – Percussion T2,” where they are perfectly reading each other’s minds.

And then there are moments that more than justify the great stature of the leader himself. Isolating the drums and bass on Holland and Smith’s tet-a-tet (“Bass – Percussion T2”) illuminates part of the genius of Dave Holland: his ability to stay rhythmically inventive, melodic and locked into what the drummer is doing all at once. Holland’s lovely pure tone is up close and exposed as he is making up a melody on the fly for “Bass – Percussion T1” with Smith on drums. As soon as he finds some luscious groove, Smith is there to exploit it.

A blessed combination of two shores and two generations but a remarkably single minded mission to make magic from dust, the double CD free jazz extravaganza Uncharted Territories continues the fertile tradition of cross-pollination between the American and British free jazz scenes. As the man in the middle of this tradition, Dave Holland continues to add meaningful music to an already ample, rewarding catalog.
Review by S. Victor Aaron
Top
Post Reply
1 post • Page 1 of 1