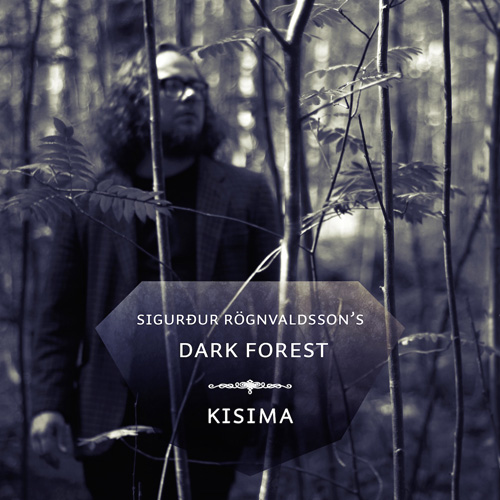 If this Icelandic guitarist's music was once described as frenetic and insistent (Equally Stupid: Exploding Head (2014)) this latest recording does nothing to undermine that classification. If anything the new line-up, known as Dark Forest and featuring Johannes Sarjasto sparring opposite Rögnvaldsson on saxophone, is even more genre bending than the previous work, including pieces which are almost placid, and at least reflective. Alongside the bassist from Sarjasto's own quartet Eero Tikkanen, Rögnvaldsson has got himself a powerful, tight rhythm section with drummer Ville Pynssi, another familiar name on the lively contemporary jazz scene in Helsinki. Together they have created an appealing album of classically youthful jazz rock.

Bearing more than a passing physical resemblance to the obsessively gifted, British classical pianist John Ogden with their heavy glasses, bushy hair and intense smiles, Rögnvaldsson shares at least a similarly driven approach to composition and performance. This latest album, Kisima, shows a broadened palette in comparison to his releases with Equally Stupid or Uinuva, with a larger share of meditative pieces like "Lonely Mammoth." But lest any listener is tempted to reach for their slippers and a good cognac, this is followed by a reversion to the full frontal assault of raw guitar and sax with "Raging Raptosaurus."

Indeed Judging by the on-line clips of duets between the two front men, these young Scandi jazzers' cooperation goes back a while, and now this release by Rögnvaldsson reveals the fruits of their intense working relationship. As in Rögnvaldsson's earlier albums, the guitar is forceful and driven while now also fluid even languid, and this music often brings to mind a youthful Robert Fripp. But here is a musician who has listened to a lot of metal music, and is now creating compositions at times lyrical, but which frequently burst with intense interaction, rhythm and also humor. It makes for intriguing and above all lively music.
by Anthony Shaw
Top
Post Reply
1 post • Page 1 of 1