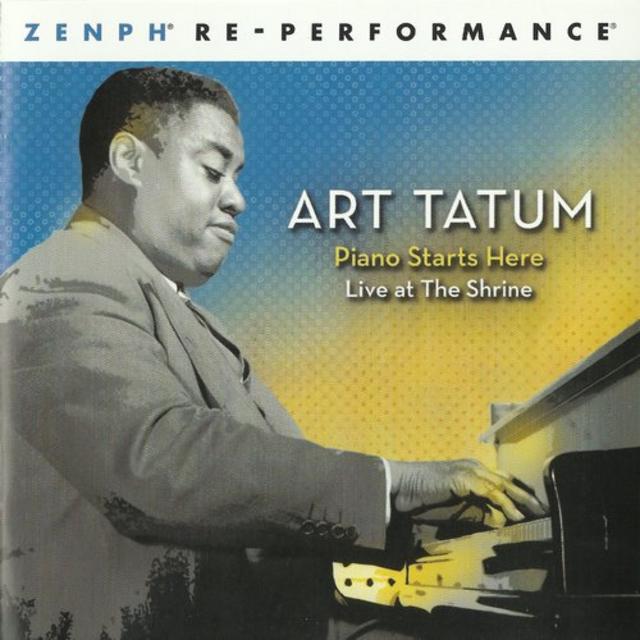 For many serious jazz fans, no pianist has ever approached the technical mastery of Art Tatum, though his virtuoso skills usually meant he was at his best unaccompanied. Many of his recordings from the 1930s and '40s were limited by the deficiencies of recording methods at the time. Piano Starts Here, long considered one of Tatum's definitive albums, combined four solos from a 1933 studio session (his first as a soloist, aside from a test pressing a year earlier), and a fabulous solo concert at the Shrine Auditorium in 1949 (the latter issued as an Armed Forces Radio Service 16" transcription disc), which has been reissued many times over the decades. But there were several problems with these releases. The pitch was slightly too slow on the live material. A medley of George Gershwin tunes was awkwardly edited (a miserly decision to save on royalty payments) to only "The Man I Love," discarding over one minute of other compositions, including "Summertime," "I've Got Plenty of Nothin'," and "It Ain't Necessarily So." The order of the live performances was also altered.

Zenph Studios decided to use 21st century computer technology to re-create this album, both the 1933 studio session and the famous 1949 concert. The technicians worked wonders with the source material, by correcting the speed and adding the missing segments. Improvements in computer technology enabled the staff to not only replicate how Tatum played each key, but also to duplicate his use of the sustain pedal, recording the playback on a MIDI file that in turn served as source for a Yamaha Disklavier Pro concert grand piano, which was recorded two different ways on the very same Shrine Auditorium stage. They even took the time to duplicate the exact location of the piano on-stage for Tatum's original Shrine concert. No audience was used for the 1933 selections, which included versions of "Tea for Two" and "Tiger Rag," in all likelihood similar to the performances Tatum used to best both Fats Waller and James P. Johnson during a Harlem cutting contest not long after Tatum arrived in New York City. Of major interest is the greatly improved fidelity of the re-creation of the 1949 concert. Instead of using generations-old, flawed tapes that were descended from the original AFRS transcription disc, the MIDI file as played back on the Yamaha Disklavier Pro concert grand piano seems closer to the essence of what Tatum's original performance sounded like. Antonin Dvorák's "Humoresque" is the playful opener (a tape transfer error on later LPs has been restored), followed by "Tatum Pole Boogie" (a rollicking inventive original that doesn't rely exclusively on a consistent, heavy ostinato bassline like most boogie-woogie). The complete restored "Gershwin Medley" (courtesy of Tatum discographer Arnold Laubich, who owned a copy of the original performance) removes for good the abrupt edit present between the opening and closing sections of "The Man I Love" on all earlier commercial issues. The uptempo showpieces are dazzling, including a romp through "How High the Moon" and "Yesterdays" (which includes a surprising octave unison segment) plus the strolling, bluesy take of "Willow Weep for Me."

The producers of this Art Tatum "re-performance" simultaneously recorded the playback in two different ways. The first 13 cuts on the CD were recorded to five tracks for a stereo surround version, to achieve ideal sound for listeners. The music is duplicated in the second half of the CD, but it is in a binaural stereo version recorded two-track into a dummy head propped as if the listener is the pianist hearing the instrument as he or she is performing. Listening to the binaural recordings on headphones gives an intimate perspective, with the applause heard mostly in the right channel and the auditorium air conditioning audible in quieter passages. It is compatible with regular CD players, Super Audio units, and Super Audio Surround Sound.

This re-performance of classic recordings by Art Tatum will likely be controversial for some collectors, who think that technology has destroyed the integrity of the pianist's performances. This CD doesn't replace Tatum's Piano Starts Here in anyone's collection, but the greatly improved sound of Piano Starts Here: Live at the Shrine should be considered a marvelous engineering feat to give jazz fans a much better idea of what the late piano virtuoso sounded like in concert on a top-notch instrument.
Review by Ken Dryden
Top
Post Reply
1 post • Page 1 of 1