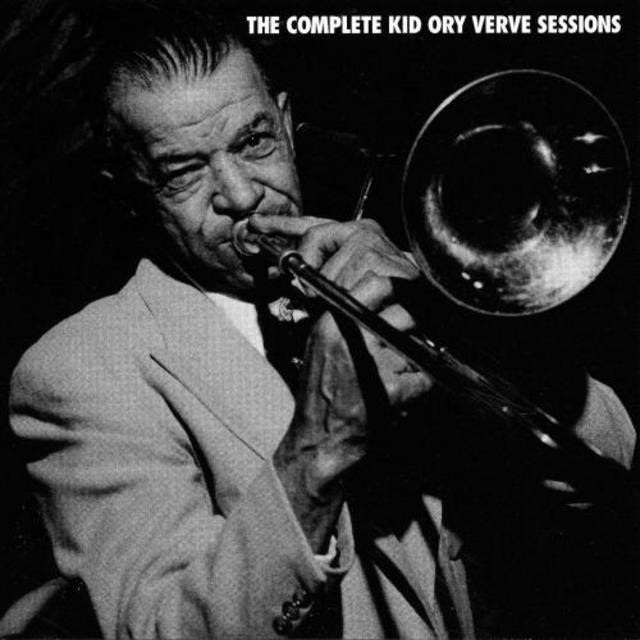 As the years continue to roll by, the 1950s and '60s seem to take on an even more elevated significance. Those who were young enough to remember, and now even those who weren't but who keep an eye on the reissues, know what a positively monumental set of riches came from the most fertile period jazz had ever seen up to that point in time. Not only was hard bop and "the new thing" a hot commodity, but a period of rediscovery ushered in a renaissance of sorts regarding the Swing and New Orleans music that had been so popular a few decades earlier but was then on the decline. Prestige had its Swingville line, with some memorable albums cut by the likes of Red Allen, Claude Hopkins, and Pee Wee Russell. Epic released a few choice sides (anyone remember Billy Butterfield's Billy Plays Bix ?), Atlantic produced four volumes of live recordings from the immortal Preservation Hall, and Verve got into the act with documents from George Lewis, Eddie Condon, Jack Teagarden (ah, such later period gems as Think Well of Me and Mis'ry and the Blues !), and Kid Ory.

It is the Kid Ory recordings that are the subject of our attention here and judging by the quantity and quality of material that was released and the more than 30 cuts that were not, Verve must have been very happy with the then seventy-something trombonist who could still hoop and holler with the best of them. Unavailable for some time, the ten albums (and the two cuts that appeared on a various artist set at Newport) that are assembled here have been collectors' items for some time, with 1961's Storyville Nights probably the only one that might ring a bell among fans of the New Orleans style. That's really unfortunate because this vital music affords so much more than just a hackneyed romp through Dixieland territory. In fact, those who frown on the collective improvisation that usually is the norm will be surprised at how much space is devoted to individual solo development.

Although space limits prevent a detailed discourse on the life and times of Edward "Kid" Ory, it should go without saying that he was one of the great New Orleans pioneers, with his "tailgate" style of trombone playing becoming the model for the early jazz bands. During his lifetime he had the good fortune of working with such legendary figures as Louis Armstrong, King Oliver, Sidney Bechet, and Jelly Roll Morton, just to name a few. Although the two decades following the '20s would leave us with a wealth of classic Ory material, the trombonist continued to work consistently and without any hint of diminished facilities up through his retirement in 1966.

The least understood of his many significant recordings, due to their limited availability, the Verve period documented several fine bands with the earliest material in the set coming from a 1956 concert in France which was originally issued as Kid Ory in Europe. Whatever these performances lack in terms of ensemble precision (writer Dick Hadlock's liners lament the overly-rambunctious drumming of Kansas Fields, although this reviewer takes no issue with Fields's incendiary approach), they certainly make up for in sheer vivacity and tenacious spirit. The program is nothing out of the ordinary ("Tiger Rag," "Muskrat Ramble," "When the Saints Go Marching In," to name but a few) but the group plays with a vigor that hints at their many years of collective experience.

Taken chronologically, the next two cuts come from a 1957 appearance at the Newport Jazz Festival which also included Red Allen, J.C. Higginbotham, and Jack Teagarden. Nothing all that monumental occurs and those wishing a better take on the pairing of trumpeter Allen and Ory are advised to advance to the 1959 sessions which were originally issued as Red Allen Meets Kid Ory and We've Got Rhythm. This is one of the greatest moments of the entire set, with Allen's bubbly trumpet a perfect match to Ory's liquid technique and juicy tone. Fourteen cuts strong, "Tishomingo Blues" and "Christopher Columbus" are just two highlights of a set that is really one tremendous victory.

Closing out 1957 are four late summer/early fall sessions that yielded 29 cuts, originally issued in piecemeal fashion on several albums. The band was a working one and their collaborative spirit proves to be a vital asset, with trumpeter Marty Marsala and the obscure guitarist Frank Haggerty particularly strong soloists. So the story goes, pianist Cedric Haywood seduced the rhythm section into swinging with an ear towards the Count Basie style and at times there's so much going on musically that one might mistake this septet for a group larger in size.

It would be almost another two years before Ory would again record for Verve, leading us to the 1959 tribute to the music of W.C. Handy. By this time, guitarist Haggerty and pianist Haywood remained, however the other seats would be filled by new faces, trumpeter Teddy Buckner proving to be another strong front line partner. Sounding perhaps a bit more arranged than the traditional New Orleans fare that was the group's part and parcel, Handy's lines could not have found a more exuberant and apropos home than with Ory and the boys.

The "concept" approach continued over the next few sessions. One December 1960 date featuring, as the album title put it, Dixieland Marching Songs sported such traditional items as "Gettysburg Mrach," "Walking With the King," "Battle Hymn of the Republic," and " It's a Long Way to Tipperary." The second one played up the Creole tradition by presenting a baker's dozen of French songs, each one's melody sung in the ethnic tongue by either Ory or an unidentified female vocalist. Never before issued, the motives regarding this one are inexplicable, yet this eccentric experiment is as charming as it is curious.

A year later (December 1961), Ory's final two sessions for Verve would take place, one going unissued until this time and the other another tribute affair. Oddly enough, the former proves to be the better of the two, with a tasty mix of Ory classics including "Muskrat Ramble," Without You (For an Inspiration, Dear)," and "Big Butter and Egg Man." The latter, a slightly irreverent salute to Jelly Roll Morton, still has it's moments, of which Ory's spoken take on "Do You Know What It Means to Miss New Orleans" provides a suitable closing statement.

Full of the "sounds of surprise" that make jazz the vital and invigorating art form that it is, Ory's Verve recordings nonetheless are not the commercially viable type that would warrant a major label reissue, making this set and Mosaic's work in this area all the more necessary and remarkable. Sound quality is consistently high throughout, expert commentary is provided by Dick Hadlock, and the booklet's choice set of photographs come from the collection of Ray Avery.
Review by C. Andrew Hovan
Top

The file isn't found at Hotlink. Any chance of putting it up again?

Thank you very much.