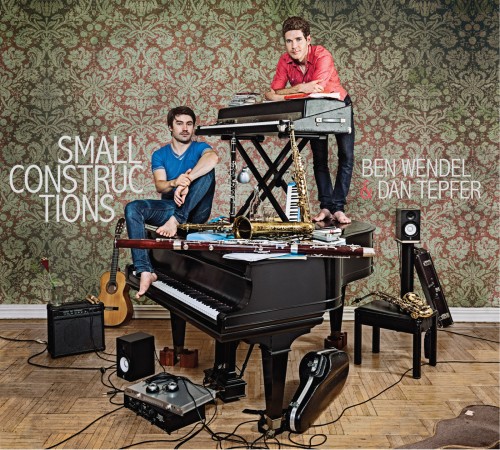 Keyboardist Dan Tepfer and multi-reed player Ben Wendel are lauded jazz artists who have made an album that goes beyond jazz, a set of songs without words that explores and celebrates multiplicity. Small Constructions – to be released by Sunnyside Records on March 12, 2013 – is a multi-tracked, multi-layered production featuring Tepfer and Wendel playing multiple instruments in multiple styles, extending from kaleidoscopic versions of Monk tunes to pieces based on Handel and Messiaen motifs, from a standard given an intimate, artful makeover to originals that underscore the duo’s melodic flair. Tepfer, a pianist who has ranged from solo improvisation to duets with sax icon Lee Konitz to variations on Bach, has been called “a player of exceptional poise” by The New York Times, while Downbeat extolled his “ability to disappear into the music as he’s making it.” Wendel, a founding member of the Grammy-nominated jazz-rock band Kneebody, has also recorded rich, wide-ranging solo albums, with the Los Angeles Times praising him as “a composer with a restless ear.”

In his liner notes to the album, Tepfer writes: “We recorded Small Constructions over the course of a few days in the Yamaha artist space in Manhattan, with some of our favorite instruments close at hand: a beautiful piano, a Fender Rhodes, three kinds of saxes, a bassoon and a melodica. It was a DIY affair – we used our own recording gear, and though we were very focused on the music at hand, we didn’t worry too much about how it would fit into a specific category or genre. The end result is a set of songs that expresses our mutual love of jazz, classical, pop and more.”

Wendel explains the duo’s bond: “Dan and I have interesting similarities in our upbringings. We both grew up with opera-singing mothers, and we each started out studying classical music before we got into playing jazz. We have a shared aesthetic sensibility from this, extending from our choice of tunes to the way we improvise together, finishing each other’s sentences. I guess you could say that we’re kindred musical spirits.”